The iron ore pellet maker is not just another commodity company.

In general, I try to steer clear of commodity companies, whose fates are mostly determined by things outside their control -- namely, the price of the underlying commodity. Nevertheless, iron ore pellet-maker Cleveland-Cliffs (CLF -1.85%) recently came across my radar, due to its low valuation and the recent reintroduction of its dividend in the fourth quarter of last year.

The fourth quarter was a time when the whole market, and especially cyclical companies, were under intense pressure, so to see a company initiate a dividend in that environment is intriguing. Even after the market's gains in 2018, many cyclical industries remain well below 52-week highs, as investors appear to be anticipating the end of the current bull market.

Upon further inspection, though, Cleveland-Cliffs appears to be an extremely compelling turnaround story. Here's why it belongs on your buy list. 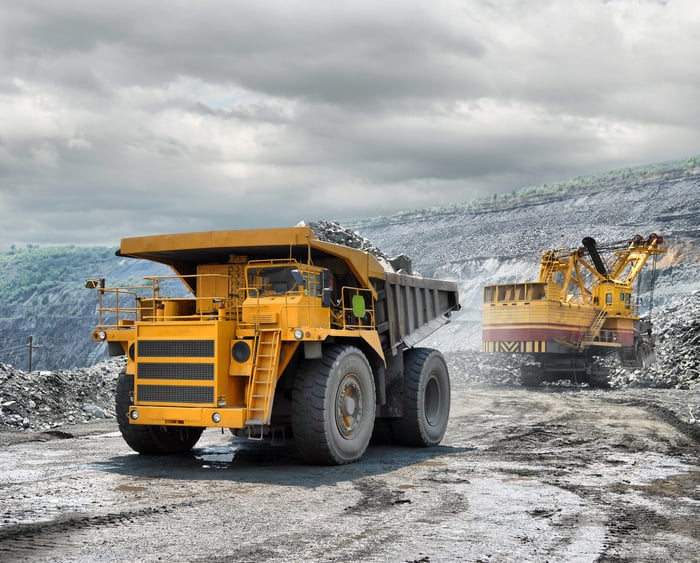 Founded in 1847, Cleveland-Cliffs is actually the oldest and largest mining company in the U.S. The company changed its name in 2008 to Cliffs Natural Resources, when prior management bought into the coal business, and embarked on an ill-fated strategy to diversify both globally and into other metals outside its core U.S. iron ore segment. That strategy was, to put it mildly, a disaster, as these ill-timed acquisitions destroyed most of Cliffs' value over the next six years: 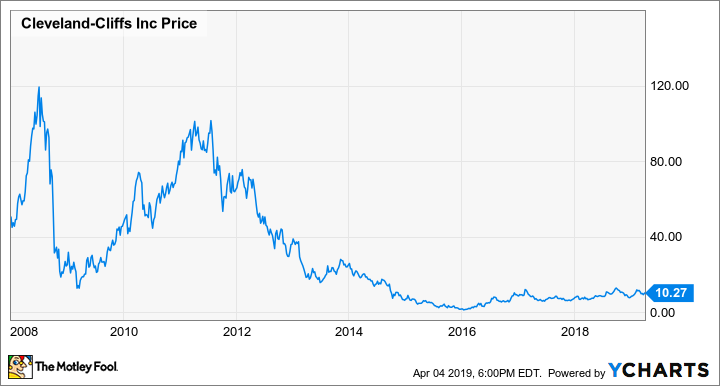 However, both the name change and strategy were reversed in 2014, when a refreshed board of directors selected former Metals USA executive Lourenco Goncalves as its CEO.

Under Goncalves, the company sold off basically all of its international and non-iron-ore pellet businesses, then doubled down on the U.S., buying out its minority partners in the company's Michigan and Minnesota mines.

Cleveland-Cliffs not only mines iron ore, but also processes it through a grinding and magnetizing process into pellets. Pellets are a high-quality feedstock that's far superior to the dirtier but lower-cost process of sintering, which mixes iron dust with limestone and pet coke. Compared with sintering, pellets are not only more efficient, but they also require about 30% less energy, and, most important, reduce air pollutants like carbon dioxide and sulfur oxide by as much as 85% to 90%.  Although sintering is still used widely in developing nations, such as China and India, more recent concerns over pollution have led both nations to greatly increase the use of pellets while phasing out dirtier sinter plants.

The new streamlined Cleveland-Cliffs is the leading U.S. producer of pellets, with 42% of U.S. pellet-making capacity. Realizing the value of pellets, Gonclaves has been able to favorably renegotiate Cleveland's contracts with its steelmaking customers. The company has more long-term, minimum-volume contracts that are now based on a variety of different steel benchmarks and commodity prices, as well as the international pellet premium, which has been rising recently due to greater adoption by developing nations.

More stable pricing and a favorable environment for pellets have delivered impressive results for Cleveland-Cliffs over the past three years.

As you can see, Goncalves' strategy to focus on its core U.S. operations, along with more favorable contract renegotiations, is paying off, with increasing revenue and profit margin expansion over the past few years. The company also benefited from 25% steel tariffs on Chinese imports in 2018, but management claims that results would have improved even without them. New contracts and a surging pellet premium over spot iron prices continue to provide a tailwind for Cleveland.

The improved results have allowed the company to pay down its net debt over the past couple of years. In light of the repaired balance sheet, the company reinstituted a $0.05 quarterly dividend and a $200 million share repurchase program in late 2018.

While the past few years have been impressive, there's reason to think Cleveland-Cliffs' best days may still be ahead. The company is underway on construction of a new hot briquetted iron (HBI) plant in Toledo, Ohio, which should become operational in 2020. HBI is an extra processing step that turns DR-grade iron ore into a higher-quality metallic that is used in electric arc furnace (EAF) steelmaking processes. EAF is a newer type of steelmaking that is more environmentally friendly, operationally flexible, and gaining market share against older blast-furnace plants.

When completed, Cleveland's HBI plant will be the only one of its kind in the Great Lakes region, and should be competitively advantaged by virtue of its proximity to EAF plants and cheap and plentiful U.S. natural gas. Management is so bullish on HBI's prospects that it just augmented the capacity of the plant from 1.6 million to 1.9 million tons per year. That will go a long way toward displacing the roughly 3 million tons of scrap steel imported into the U.S. annually from less-dependable countries such as Russia, Ukraine, Brazil, and Venezuela.

In addition, Goncalves explained on a conference call with analysts, the pricing in the iron ore market has not fully reflected the effects of the Vale mine disaster in January. He predicts that pellet premiums will go even higher in 2019, and given his record, I wouldn't doubt his opinion.

Goncalves also said that only 65% of Cliffs' contracts have been renegotiated since he became CEO. As more and more older contracts expire, Cliffs' pricing should become even more favorable on a relative basis.

Buy with both hands

Despite all these positives, Cleveland-Cliffs trades at just 7.5 times this year's earnings expectations. There are risks, of course: Steelmaking is a cyclical industry, so any downturn in the economy would affect Cleveland-Cliffs' financials, even with its renegotiated contracts. In addition, a trade deal with China could remove the 25% steel tariffs that were implemented last year -- though a potential resulting economic upturn could be a counteracting positive. Finally, iron ore mining is a capital- and labor-intensive business, with the potential for union and pension issues.

However, if you don't think we are headed for a recession in the near future, there are just too many positives at Cleveland-Cliffs for investors to ignore. When you combine that with a cheap valuation and Goncalves' successful track record, Cleveland-Cliffs looks to be one of the best value opportunities around, and I recently became an excited shareholder.

Why Cleveland-Cliffs Stock Jumped as Much as 18% Today
395%