New Age Beverage signed a big distribution deal and 2U made a strategic acquisition.

As for individual stocks, New Age Beverage (NBEV -75.00%) skyrocketed after signing up the world's largest retailer as a distribution partner, and 2U (TWOU 3.74%) announced an acquisition. 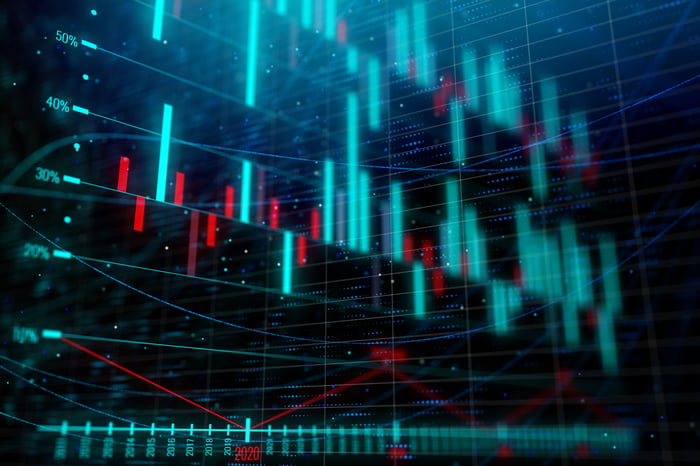 Shares of New Age Beverage soared 38.6% after the company announced it landed its first national distribution account with retailing giant Walmart. Three flavors of New Age's Marley Mate, a drink positioned as a healthy beverage and based on the South American tea yerba mate, will be available in Walmart stores this month.

New Age acquired the Marley brand in 2017 and has launched several lines of beverages under the name, which the company said was one of its leading growth brands in 2018. New Age expects that the deal with Walmart could lead to distribution of the beverage specialist's full portfolio.

New Age appeared on the radar of marijuana investors last year when it announced plans to start selling drinks infused with cannabidiol (CBD), causing the stock to skyrocket and then fall back. Still, it ended up as one of the best-performing cannabis-related stocks of the year, and investors are looking forward to the global launch of Marley Mellow Mood + CBD later this year.

Online education specialist 2U announced it is acquiring Trilogy Education, a company that specializes in teaching students coding skills in boot camps, in a stock-and-cash deal worth $750 million. Shares slipped 3.4%.

2U will pay shareholders of privately held Trilogy a total of $400 million in cash and $350 million in newly issued shares of 2U, financed by cash on hand and $250 million in new senior debt. The transaction was approved by both boards, is not subject to a shareholder vote, and is expected to close within 60 days.

2U works with universities to develop online graduate and certificate programs, and sees Trilogy's "workforce accelerator" boot camps in coding, data analytics, user interface design, and cybersecurity as a strategic fit with its existing business. The deal will expand the number of universities 2U is working with from 36 to 68. 2U is unprofitable, but is growing revenue rapidly as it adds programs and university partners.

Why 2U Is Jumping 7% This Week

Why 2U Is Getting Cut in Half Today

3 Stocks That Are Ready to Bounce Back

Why 2U Stock Went Up on Friday