The video-game retailer is hopeful for the long-term future despite the immediate future looking bleak.

Not many people were expecting GameStop (GME -7.50%) to have a good fourth quarter, and the video-game retailer's earnings report didn't bring any surprises. Sales fell, profits slid, and guidance for the coming year was pretty dour, with the first half of the year expected to be loss-generating and much of their hopes for a profitable back half resting solely on the fourth quarter.

However, there was plenty of hopeful talk about what the future may hold as the company has a new CEO and is embarking on a new cost-cutting plan that will rely on experiential moments for consumers as e-sports figure into the equation. Yet most of that will happen well in the future, meaning investors may feel like they're slogging through a God of War battle scene in the near term. 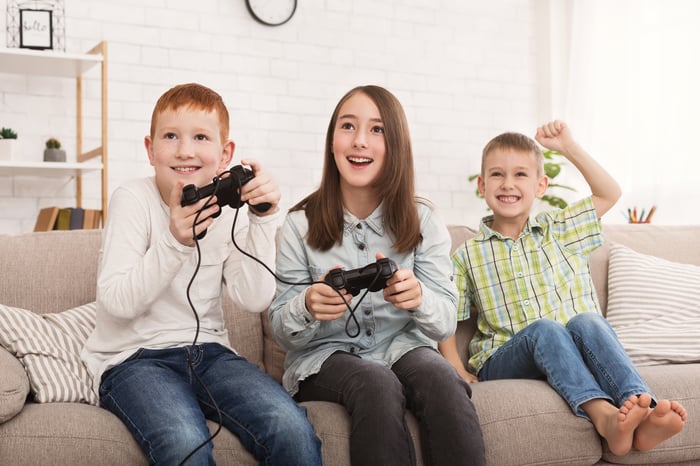 GameStop's revenue was not good, falling 7.6% for the quarter due primarily to a decrease in pre-owned video-game sales; declining new software sales, despite the release of key titles during the quarter that underperformed expectations; and an extra sales week in the fourth quarter of 2017. Yet even adjusting for the calendar shift, sales were still down 3.8%.

Surprisingly, though, comparable-store sales were up 1.4% for the period, with U.S. retail stores seeing comps jump 3.4% as hardware sales, particularly for the Nintendo Switch, stood out. Other consoles, though, such as Microsoft's Xbox One X, did not compare favorably, though that was likely due to it having been released in the year-ago quarter to strong acclaim.

Still, GameStop says the console market is nearing the end of its product cycle, particularly for the Xbox and Sony's PlayStation, and consumers may decide to hold off on making new purchases until they come out with new gear. Software sales will also be running into strong headwinds because of the release last year of so many popular and much-awaited game titles. New software sales were down 7.8%.

COO and CFO Robert Lloyd told analysts the retailer was working to develop ways to get sales back on track, but it's going to be fairly bleak until that happens. "We're working on strategies to improve this business, but until we see traction," he said, "we're planning for the current trends to persist."

GameStop's fourth-quarter losses widened to almost $188 million from $106 million a year ago as it took goodwill and asset impairment charges of $428 million, which was only partly offset by the $101 million in net proceeds it gained from the sale of Spring Mobile.

A sporting chance for growth

GameStop does see growth coming in accessories, which saw a near-19% increase in revenue this quarter as online games like Fortnite and Apex Legends continue to dominate. Unfortunately, that also undermines its business since selling headsets and controllers for digital properties means consumers ignore its video games, both new and used. Accessories revenue, though, now comprises 11.5% of total sales, up from 9.5% a year ago.

To compensate, GameStop is diving into e-sports, entering into partnerships with Infinite eSports & Entertainment, Envy Gaming, and Complexity Gaming, which is partially owned by pro football's Dallas Cowboys team. It is establishing an 11,000-square-foot "performance center" in Texas in partnership with Complexity that it envisions will become a training ground for gaming clinics, while its own stores may serve as locations for online training.

Lloyd deems it could become "the youth sports league of e-sports, where we can provide unique experiences for the amateur gamer and help develop and prepare the next generation of professional gamers."

A lot of this still needs to be figured out, though, particularly how the company can profit from it, and it is new CEO George Sherman who will be tasked with doing so. Until then, GameStop is counting on driving an additional $100 million in profitability through more cost-cutting measures, and then leveraging improvements in its business.

However, that's not going to happen this year, so GameStop is front-loading 2019 to be worse than last year, while hoping some of its initiatives eventually pay off. Because there is no let-up in the transition to digital and online gaming, the video-game retailer will likely have a rough outing for some time to come.