This time, individual account holders can get free smart speakers.

Late last year, Spotify (SPOT 1.42%) announced a generous promotion in which Family Plan account holders in the U.S. could score a Google Home Mini for free. The deal was a win-win for the Swedish music streaming leader and the Alphabet (GOOG -1.29%) (GOOGL -1.34%) subsidiary, as it reinforced the already strong retention for Spotify Family Plans and helped Google ship even more smart speakers. Spotify extended the partnership last month with a similar offer to Family Plan accounts in the U.K. and France.

The company is expanding the promotion yet again. 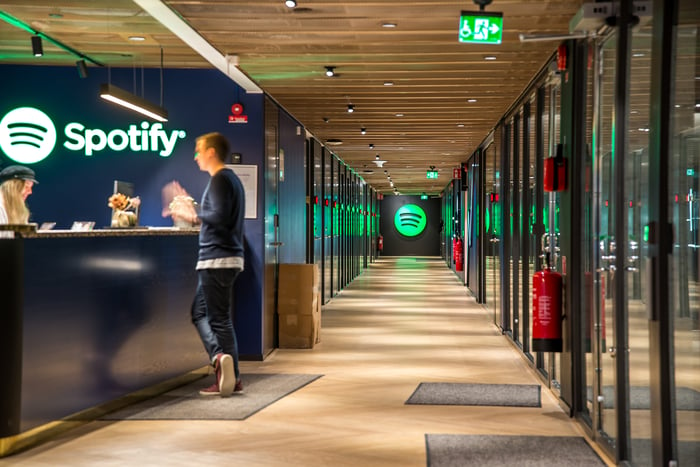 Spotify is now bringing the Google Home Mini promotion to Canada, but this time around any premium subscriber is eligible, not just Family Plan users. New and existing individual subscribers that pay around 10 Canadian dollars per month can now take advantage of the offer through May 9 (or while supplies last).

The company had previously estimated that the U.S. promotion hurt gross margin in the fourth quarter by about 50 basis points, and later credited its outperformance in subscriber growth in part to the offer. "Outperformance was largely attributable to better than expected intake from our Google Home promotion and annual Holiday campaign," Spotify said in its February shareholder letter. Spotify also added that it believes that "home voice speakers are a critical area of growth."

Opening up the offer to individual account holders is also notable for a couple of reasons. Family plans enjoy much higher retention, but also lower average revenue per user (ARPU), since family plans can include up to six accounts. By wooing individual accounts more aggressively, Spotify can potentially bolster its overall ARPU while improving retention among individual accounts. Spotify's biggest rival, Apple (AAPL 0.17%), does not support Apple Music on Google Home Mini, for instance, although that could potentially change soon; Apple has been increasingly open to cross-platform strategies lately amid its ongoing services push.

Fending off Apple with promotions

More broadly, aggressive promotional activity has been key to Spotify defending against Apple Music. The Mac maker's music-streaming service overtook Spotify in the important U.S. market in February. Apple was expected to accomplish that sooner, but Spotify was able to delay losing leadership with a series of promotions like the Google Home Mini deal. Apple's monthly subscriber growth rate in the U.S. and abroad is said to top Spotify's, which should concern Spotify even as its subscriber base is still roughly twice as large.

Spotify's pockets may not be nearly as deep as Apple's, but promotional activity appears to be worth investing in. Spotify CFO Barry McCarthy suggested that more offers may be in store. "We see additional opportunities for growth in bundling in the hardware space," McCarthy said in February.