Is Tesla's most important supplier worried about demand?

"Tesla and Panasonic are freezing plans to expand the capacity of their Gigafactory 1," asserted Asian business publication Nikkei in a new report this week. The move follows Tesla's (TSLA) worse-than-expected first-quarter vehicle deliveries -- figures that were weighed down by a significant decrease in Model S and X sales.

Tesla shares fell more than 3% Thursday morning as investors considered whether this is a sign of weaker-than-expected demand for the company's vehicles. 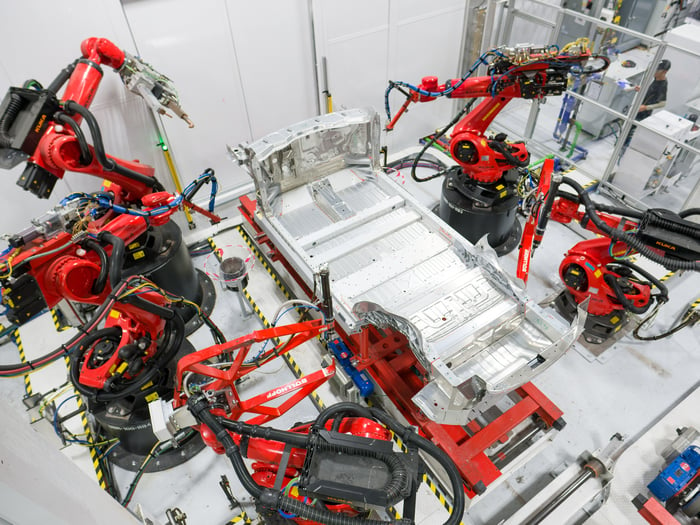 Panasonic to watch the "demand situation"

Responding to Nikkei's report, Panasonic (PCRFY 0.75%) said it is "watching the demand situation," according to Reuters. The Japanese battery specialist "will study additional investments over 35 [gigawatt-hour production capacity] in collaboration with Tesla," the company said.

Tesla's deliveries have increased significantly on a year-over-year basis recently, requiring unprecedented battery production volume. Gigafactory 1 in Nevada has a battery-production capacity of 35 gigawatt-hours, making it the largest battery factory in the world. Further investments in battery production were expected from both companies. But if demand for Tesla's current production and delivery volume can't be sustained, incremental investment could be put on hold until the demand situation improves.

Nikkei's report also said that the Japanese company is suspending its planned investment in Tesla's under-construction Gigafactory in Shanghai. "Instead, it will provide technical support and a small number of batteries from the Gigafactory," wrote Nikkei's Daishi Chiba and Itsuro Fujino. "Tesla is committed to buying batteries for the cars built at the Shanghai factory from a number of makers."

Tesla downplayed the report. "We will of course continue to make new investments in Gigafactory 1, as needed," a Tesla spokesperson said in a statement to Reuters. "However, we think there is far more output to be gained from improving existing production equipment than was previously estimated."

Deliveries are soaring on a year-over-year basis

Tesla's new Model 3, which accounts for the bulk of the company's total deliveries, is by no means a flop. Though Tesla's vehicle deliveries fell 31% sequentially, they are up 110% year over year thanks to rising Model 3 sales. Trailing-12-month vehicle deliveries are up 158% year over year. In addition, rising Model 3 production and deliveries last year meant that in terms of revenue, the vehicle was the best-selling passenger car in the U.S. during the second half of the year.

While there's a chance that demand for Tesla's vehicles isn't as robust as management expected, a sequential decline in a single quarter -- particularly when deliveries are soaring on a year-over-year basis -- isn't a reason for investors to be too concerned. But if quarterly deliveries can't resume growth sequentially in the coming quarters, investors (and management) -- may have to lower their expectations.