The pharmacy retailer's net loss wasn't as bad as expected. But its sales came in well below estimates.

Rite Aid (RAD -0.53%) had a good start to 2019, but the stock has been spiraling downward since late January. The pharmacy retailer's share price is now down more than 20% this year.

Investors were eager to find out if Rite Aid could begin to turn things around in the company's quarterly update. Rite Aid announced its fiscal fourth-quarter results for the period ending March 2, 2019, before the market opened on Thursday. Here are the highlights. 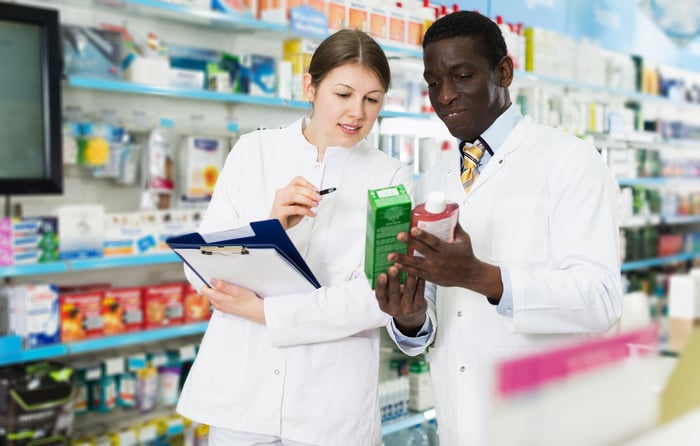 Rite Aid reported revenue from continuing operations for the fourth quarter of $5.38 billion, just a little below the prior year's Q4 revenue of $5.39 billion. Analysts had estimated that the company would earn $5.56 billion.

Rite Aid CEO John Standley emphasized the positives. He stated, "In the fourth quarter, we continued generating critical momentum in key areas of our business while taking important steps to position Rite Aid for future growth." Standley added, "Despite a mild flu season, we delivered our third consecutive quarter of same-store pharmacy sales and prescription growth thanks to a record number of immunizations and other script growth initiatives."

However, there were plenty of negatives. Rite Aid's pharmacy sales were adversely impacted by new generic introductions. Its bottom-line improvement stemmed mainly from the positive impact of a prior-year charge for the impairment of goodwill of $191.0 million, net of tax, and lower income tax expense. Rite Aid also posted a decline in front-end same-store sales and higher distribution costs.

The company has taken some steps that could impact future performance. Rite Aid remodeled 30 stores. This brought the total number of wellness stores to 1,765. The pharmacy retailer also closed 56 stores, leaving a total store count of 2,469 at the end of Q4.

Standley said that the continued transformation of Rite Aid's business "to better align with our new operational footprint and deliver greater value" would help build momentum in the coming year.

Perhaps the worst news from Rite Aid's update was the company's outlook for fiscal 2020. Rite Aid forecast revenue between $21.5 billion and $21.9 billion. However, analysts expected $22.09 billion.

Rite Aid thinks that it could report net income in fiscal 2020 of as much as $0.04 per share. However, the low end of the company's projection is a net loss of $0.01 per share. Analysts predicted $0.02 per share in adjusted earnings for the year.

The reality is that Rite Aid continues to face significant issues. The reimbursement environment in the U.S. is challenging. Rite Aid isn't likely to be able to offset reimbursement declines with lower generic drug prices at this point. Investors can probably expect more uncertainty for the struggling pharmacy retailer in future quarters.