Please ensure Javascript is enabled for purposes of website accessibility
Log In Help Join The Motley Fool
Free Article
Join Nearly 1 Million Premium Members And Get More In-Depth Stock Guidance and Research
By Daniel B. Kline – Apr 13, 2019 at 8:15AM

With tax day nearly here, many of us just don't like how things turned out.

Few people enjoy filing taxes. Even if you expect a refund, actually going through the process of filling out tax forms is fairly unpleasant, and changes in the tax laws for this filing season left many people uncertain as to what to expect.

"The results don't seem to align with what we've been hearing anecdotally about people's feelings of filing taxes under the new tax law. Despite a perceived unhappiness, the good news is the largest proportion of people say they're satisfied with their tax filing outcome," said NEFE CEO Billy Hensley. 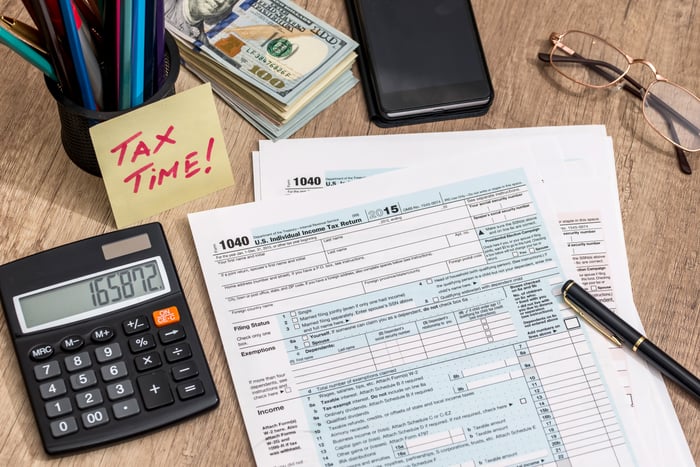 The new tax laws led to uncertainty before the filing season began. Many Americans were unsure if they would get refunds or end up owing money. Only 7% of filers said they paid more than they had in the past, according to the results of the 2,000 person survey. Other findings were:

How do Americans spend their refunds?

"Getting a large payout such as a tax refund is a great opportunity to make progress on financial goals such as paying down debts and starting an emergency savings fund," Hensley said.

If you get a tax refund, you should use it responsibly. Pay off high-interest debt (credit cards and personal loans) before doing anything else. After that, you may want to tackle other debt like student loans, or even mortgage principle. You also want to make sure you have an adequate emergency fund.

Generally, that's six months of living expenses, but in some cases more might be needed. If you have health problems or anticipate being out of work for long periods of time, it's smart to save as much as you can.

If you've checked off all of those boxes, you can invest your refund toward longer-term goals, like retirement. You might also consider spending some of it for fun -- maybe a vacation or a big-ticket purchase -- but you should only use your refund that way if your finances are in good overall shape.