Chick-fil-A is the top restaurant for U.S. teens, according to Piper Jaffray's latest "Taking Stock With Teens" survey. The study, which polled 8,000 teenagers about their favorite brands, found that the private fast-food chain surpassed Starbucks (NASDAQ:SBUX), Chipotle (NYSE:CMG), Dunkin' Donuts (NASDAQ:DNKN), and McDonald's (NYSE:MCD) in popularity. 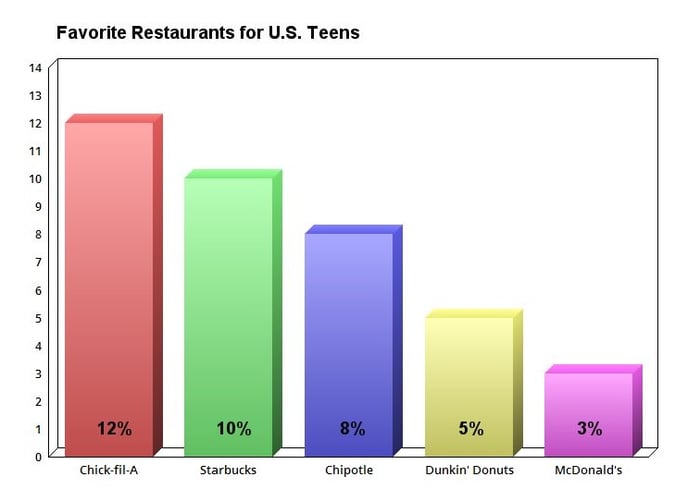 Chick-fil-A is also more productive than those four chains despite being closed on Sundays. QSR Magazine's latest numbers indicate that the average Chick-fil-A generated $4.09 million in sales in 2017, compared to $945,270 per Starbucks, $1.94 million per Chipotle, $733,130 per Dunkin' Donuts, and $2.67 million per McDonald's.

Chick-fil-A has grown its sales every year since it was founded in 1946. The company's ongoing success can be attributed to rigorous standards for new franchisees, the consistent quality of its food, and its high standards for employee and customer care.

And it's not just teens who love Chick-fil-A -- last year, it was ranked the country's most beloved fast-food chain in American Customer Satisfaction Index's survey for the third year in a row. Chick-fil-A probably won't stop growing anytime soon -- and fast-food leaders like McDonald's should be worried.