Please ensure Javascript is enabled for purposes of website accessibility
Log In Help Join The Motley Fool
Free Article Join Over 1 Million Premium Members And Get More In-Depth Stock Guidance and Research
By Keith Speights – Apr 16, 2019 at 6:00AM

The fat lady is getting ready to sing with this big pharma deal. Celgene shareholders will soon have a decision to make.

Sure, there was some drama along the way with Bristol-Myers Squibb's (BMY 0.13%) proposed acquisition of Celgene (CELG). But it never made sense to bet against the deal. And now shareholders of both companies have approved the transaction. The only things left are the standard regulatory approvals and closing formalities.

Bristol-Myers Squibb (BMS) and Celgene expect that the deal will close sometime in the third quarter of 2019. Celgene shareholders will receive $50 in cash and one BMS share for every share of Celgene they own. Here are the main reasons I think investors should hold on to their BMS stock once the dust settles. 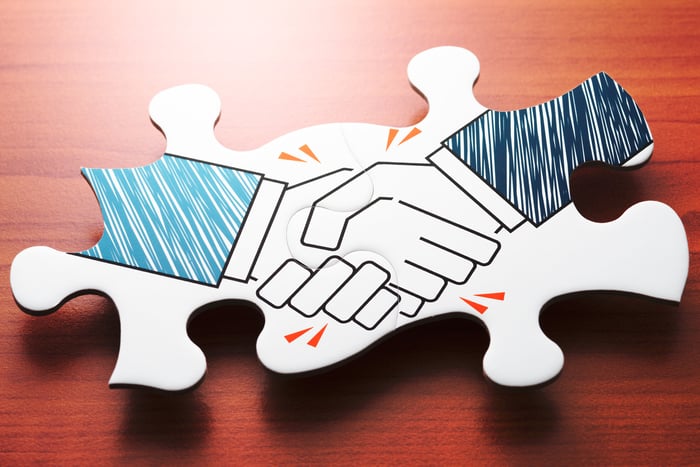 What does great growth plus OK growth equal? In this case, pretty good growth. And that's probably the most important reason why investors will want to keep their BMS stock after the Celgene acquisition closes.

Celgene recently reached another settlement, this time with Alvogen, that only allows limited-volume generic competition for its top-selling drug at some undisclosed point after March 2022, when Natco Pharma can offer its generic version of Revlimid in limited quantities. I suspect the biotech will be able to preserve a significant portion of Revlimid sales through 2026, when the limited-volume restrictions with generic rivals will no longer be in effect.

That gives BMS plenty of time to launch the multiple new drugs in Celgene's pipeline with huge sales potential. Celgene expects that multiple sclerosis drug ozanimod will deliver peak sales between $4 billion and $6 billion. Cell therapies liso-cel and bb2121 could each generate at least $2 billion annually. Fedratinib and luspatercept could also be blockbusters.

BMS, of course, has cancer drug Opdivo and blood thinner Eliquis. Sales for both drugs continue to grow by more than 30% annually. Market research company EvaluatePharma ranks Opdivo at No. 4 in its top-selling drugs of 2024 with Eliquis at No. 5. Revlimid, by the way, is ranked at No. 3. Once the Celgene transaction closes, BMS will claim three of the world's biggest winners.

Here are two words every investor should keep in mind when evaluating a stock: total return. Stock appreciation is always good. But when you add in solid dividends, the total return can be really nice.

But BMS also pays a dividend that currently yields north of 3.5%. The Celgene transaction shouldn't keep the big drugmaker from shirking its dividend.

If BMS can grow earnings by 10% annually, with its share price moving up by the same amount, and keep paying its dividend at current levels, we're looking at a realistic total return in the ballpark of 13.5% or perhaps greater. A stock that can deliver that kind of total return, assuming dividends are reinvested, will double in less than six years.

There is one non-factor in deciding whether to keep your BMS shares after the transaction is complete. Celgene shareholders will receive one contingent value right (CVR) for every Celgene share owned regardless of whether the BMS shares received are subsequently sold.

This CVR entitles the owner to receive $9 per share if the FDA approves ozanimod and liso-cel by Dec. 31, 2020, and approves bb2121 by March 31, 2021. Note that all three drugs must win FDA approval by the specified dates to get the additional payment.

Celgene appears to be in good shape on making all three milestones. The biotech submitted ozanimod for FDA approval in treating MS in March. Celgene's chief medical officer, Jay Backstrom, said in the company's Q4 conference call in January that U.S. approval for ozanimod is expected in the first half of 2020. He also said that "both liso-cel and bb2121 remain on target for expected 2020 approvals."

I haven't been a fan of Bristol-Myers Squibb's acquisition of Celgene. It wasn't that I didn't think there was a good fit. I just thought Celgene was worth more than what BMS was paying. But there will be no more "shoulda, woulda, coulda" from me. The deal is going through -- and I'll make a nice gain on the transaction despite my pessimism.

In a few months, many current Celgene shareholders (including me) will become BMS shareholders. My view is that we'll all do well holding on to our BMS stock.

Is Bristol Myers Squibb Stock a Buy With Its New-Product Sales Soaring?
356%