Please ensure Javascript is enabled for purposes of website accessibility
Log In Help Join The Motley Fool
Free Article Join Over 1 Million Premium Members And Get More In-Depth Stock Guidance and Research
By Keith Speights - Apr 16, 2019 at 7:15AM

On average, more than 32 million shares of Aurora Cannabis (ACB -7.22%) are traded on the New York Stock Exchange (NYSE). For Canopy Growth (CGC -6.05%), the average trading volume is much lower -- around 8 million shares. There's no way to know who's doing all this buying and selling of these top Canadian marijuana stocks. But we do know who at least one buyer was last year.

Sweden's government-run AP7 pension fund first bought shares in Aurora and Canopy Growth in 2018, according to Swedish business magazine Affärsvärlden. The AP7 pension fund initially invested 63 million Swedish kronor, with the valuation since then soaring to 100 million Swedish kronor this spring, according to a report from Sweden's public television broadcaster, SVT News.

Why is this Swedish government pension fund investing in pot? And why Aurora Cannabis and Canopy Growth? There's a simple explanation. 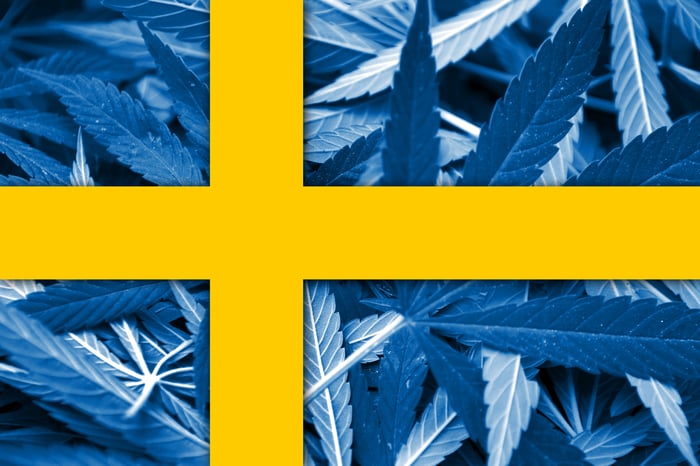 The AP7 Equity Fund invests in nearly any stock that is included in the MSCI ACWI Index. The only exceptions are stocks that AP7 has blacklisted for some reason.

AP7 seeks wide global exposure to equities with its pension fund. It makes sense that the fund uses the MCSI ACWI Index. This index's holdings include more than 2,700 stocks across 11 sectors in 23 developed markets and 24 emerging markets.

So when Aurora Cannabis and Canopy Growth were added to the MSCI ACWI Index in 2018, AP7 scooped up shares of both stocks. The Council on Ethics of Sweden's AP Funds recommended against buying cannabis stocks. But the AP7 Fund's managers chose to ignore that recommendation.

At this point, AP7 hasn't blacklisted cannabis stocks. However, Johan Floren, head of communications and market management at AP7, stated that it's possible that cannabis stocks could be included on the AP7 fund blacklist in the future, according to Affarsvarlden.

It's not just Sweden

At the end of 2018, PSP's biggest cannabis stake was in Canopy Growth, with its position then valued at nearly $14.9 million. Aurora Cannabis was the pension fund's second-largest cannabis holding with a valuation at the end of last year of $12.7 million. PSP's stakes in Aphria and Cronos Group were roughly $3.2 million and $4.5 million, respectively.

Does it really matter that government-run pension funds are buying shares of marijuana stocks like Aurora Cannabis and Canopy Growth? Yes and no.

On one hand, pension funds buy hundreds of stocks to better diversify their holdings. It's one thing when a pension fund carefully considers a given marijuana stock and determines that it's likely to outperform the market over the long run. It's another thing altogether when a pension fund like Sweden's AP7 buys Aurora and Canopy solely because the stocks were added to an index.

However, the mere fact that pension funds are buying marijuana stocks is important for other investors considering jumping on the cannabis bandwagon for one primary reason: legitimization. For a long time, many considered marijuana stocks as purely speculative and extremely risky. But when government entities put money intended to fund public employees' retirement in marijuana stocks, it sends a strong signal that at least some of these stocks aren't as speculative and risky as previously believed.

Don't go out and buy Aurora Cannabis, Canopy Growth, or any other marijuana stock just because the pension funds of Sweden, Canada, or California are doing so. But the global cannabis industry presents a real opportunity with real prospects of significant returns over the long run. When pension funds start investing in an industry, it's worth paying attention to that industry.