Sometimes opportunity comes in the shape of trouble.

Huge, insurmountable problems for a company can spell disaster. Passable problems and solid fundamentals, on the other hand, can create ripe opportunities for investors. Apple (AAPL 1.62%) and Biogen (BIIB 3.28%) are facing down troubles that could create value if resolved. Is an opportunity present? Let's take a look.

Apple is one of the largest publicly traded companies, with a market cap of $938 billion and net income of almost $60 billion in 2018. However, this gigantic tech company has been beaten down by sluggish iPhone sales and trouble in China and is now trading down 14% from its highs. If Apple can overcome these headwinds, investors might have a winner on their hands.

So what's going on in China? Since the U.S. slapped tariffs on Chinese goods, the country has been going through an "economic deceleration." Last year, China's economy grew 6.6%, it's worst rate in 28 years, and this year it is projected to grow even slower.  As a result, Apple's first quarter sales were down more than 25% in China.

To make matters worse, worldwide iPhone sales were down 15% in its first quarter. The reason? Customers are holding onto their iPhones longer. That's right, new features such as the Super Retina display are not stirring up customers enough to fork over nine-hundred bucks for a new model. Of course, this is bad news for Apple because iPhone sales create the majority of its revenue. 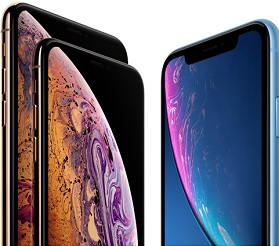 Does Apple have a path forward? Part of the answer can be found in Apple's other product lines -- services; wearables, home and accessories; Mac; and iPad. These product categories had outstanding growth rates in the latest quarter. Services revenue was up 19% to an all-time high of $10.9 billion, and wearables, home and accessories grew 33% to $7.3 billion. Mac and iPad grew by 9% and 17%, respectively. These categories grew by just over $5 billion, while the iPhone dropped by $9 billion. In other words, a $9 billion revenue shortfall was turned into a smaller $4 billion problem. If these categories can continue to grow and if better cameras and batteries spur iPhone sales, Apple can return to growth.

Kicking the tires on Apple, we find that the company had a 10-year median return on equity (ROE) of 37% compared to an S&P average of 14%. Think of return on equity as how well the company is doing with investors' money. If it can put the capital to good use then investors should receive higher returns. In this case, Apple is turning in a score twice that of its benchmark, highlighting the company's exceptional ability to deploy capital to generate profits for shareholders.

Turning to another key fundamental, earnings, we see that Apple had five-year earnings growth of 16% and year-over-year growth of 29%. Think of earnings as the funds the company can use to invest in new opportunities or to give back to shareholders in the form of dividends. It is the rocket fuel needed to generate higher returns and in this case, the supply is increasing. So, what underlies this pick-up in growth business-wise? Apple has been aggressively buying back shares in recent years, reducing its share count from just over 6 billion in 2013 to just under 5 billion in 2018, which has served to juice the company's earnings per share. In addition, the company has been successful at pushing out higher priced iPhone models to boost average selling prices. However, returns from this strategy are beginning to level off. As a result, Apple must continue to push for strong growth in its products outside of the iPhone in order to maintain growth.

Biogen is facing troubles of a different sort: it can't get its products out the door.  In March, the $45 billion market cap drugmaker revealed that trials for its key Alzheimer's drug, Aducanumab, would end after a late-stage trial review found that it was not meeting "end-point goals". In other words, it doesn't work. This came as a huge blow to Biogen, as the treatement was viewed as a potential "blockbuster" with future revenues estimated at $12 billion.  As a result of this  news, Biogen's share price is trading 40% below last year's high despite revenue growth of 10% in 2018. Can the company overcome the gaping hole left by Aducanumab's end and reinflate expectations? Let's take a look.

Biogen's a portfolio of multiple sclerosis (MS) drugs represented nearly 80% of the company's 2018 revenues. Unfortunately, sales of these treatments were down 4% in 2018. This is due to the fact that, since 2015, the MS market has started to become saturated, and Biogen has begun facing competition from generics. In other words, there's no easy solution to Biogen's MS problem.

However, the company has a treatment pipeline of over 20 drugs, including treatments for stroke, lupus, and MS that could prove to be winners if they come to fruition. The problem, though, is that these pipelines include clinical trials that take years of research and cost millions of dollars. Aducanumab, for example, cost the company $743 million over the course of three years.     Despite these issues, Biogen does have one huge positive -- the  $3.5 billion of cash it has on its balance sheet. This nest egg could be used to make an acquisition that spurs growth in the coming years.

Turning to fundamentals, we see that Biogen had a 10-year median ROE of 22%, which outpaced the S&P average of 14%. However, five-year earnings growth for the company clocked in at 14% while year-over-year growth was 10%. This indicates that the company's fuel source to generate great returns for investors is shrinking, which makes sense for a company whose primary portfolio of MS drugs is declining in profitability. As a result, the company has to look for other ways to spur growth, either through a new pipeline drug or an acquisition in order to deliver good returns to investors.

All-in-all, the path forward for Biogen is murky at best -- its core MS products face stiff competition, the pipeline payoff is a roll of the dice, and an acquisition is a guess at this point. Also, we see a trend of shrinking earnings, which does not lend itself to higher returns.

In the final analysis, both companies face challenges, but Apple has the easier hurdle to jump. The company can look forward to a trade deal and growth in its product lines outside of the iPhone to help with its headaches. Biogen, on the other hand, must look to its treatment pipeline and a possible acquisition to reinflate expectations -- murky solutions at this point. Investors seeking to capitalize on opportunity clothed in trouble should take a look at Apple.