Netflix's management also provided important updates on several fronts, including the company's view of new competitors. Let's have a closer look at the first quarter of 2019.

Netflix by the numbers

In the first quarter, Netflix increased its top line by 22% to $4.52 billion. Earnings rose 19% year over year, landing at $344 million, or $0.76 per diluted share. These results compare favorably to the company's guidance targets, which pointed to earnings near $0.56 per share on sales of roughly $4.49 billion.

In terms of subscriber additions, Netflix added 9.6 million net paid subscribers on a global level. Guidance was aimed at 8.9 million. The company added 7.9 million international accounts and 1.7 million domestic subscribers. All told, the global number of streaming accounts grew 24% year over year, stopping at 148.9 million. Netflix also reported 2.6 million subscribers to its aging DVD service, down from 2.7 million last quarter and 3.1 million a year ago.

Investors also keep a close eye on Netflix's free cash flow. The company consumed $460 million of cash in the first quarter compared to $287 million in the year-ago period.

Looking ahead, Netflix expects second-quarter earnings of approximately $0.55 per share on revenue in the neighborhood of $4.93 billion. Hitting those targets exactly would amount to year-over-year sales growth of 26% and 35% lower earnings. Paid subscriptions should grow by another 5 million, landing near 154 million accounts. 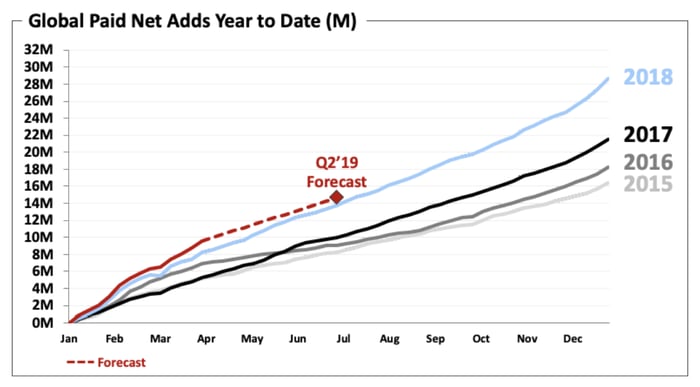 CEO Reed Hastings pointed to the usual growth engines behind these results. Consumers around the world are enjoying Netflix's original content, which inspires steady subscriber growth over time even if monthly fees are rising in key markets like the U.S., Brazil, and some European countries.

We had some great international breakouts where they really helped drive excitement. By way of example, Kingdom in Korea that did phenomenal and is getting watched all over the world and throughout the region. So we think we've been able to work on a very local basis and very global basis with the content this year, this quarter.

That was a recurring theme in the earnings call. Netflix is going out of its way to create original content on a local level with as much authentic flavor as possible. In doing so, the company has found that audiences in other territories also flock to these sort-of-exotic movies and shows.

"The more authentically local the show is, the better it travels, which we've seen with Kingdom," Sarandos said. He continued:

Fans of K-Drama around the world have loved that show and it resonated incredibly well for us in Korea. Similarly, coming up we have a new season of The Rain coming out this quarter that is perfectly Swedish. We don't try to water it down or make it travel any better inorganically and we found that the best way to make global stories is to make them incredibly authentically local.

As expected, Hastings spent some time discussing how his company is reacting to the upcoming launches of video-streaming services from Walt Disney (NYSE:DIS) and Apple (NASDAQ:AAPL). Also as expected, he largely brushed them off.

And so, we're thrilled to have Apple and Disney in, they are awesome companies and just to be in the same league as them is very exciting for us. And then on a practical basis, there's already so much competition. I mean, we mentioned we only win 2% of downloading on mobile, it's like 98% of the time people are not doing Netflix. On U.S. televisions, 90% are not watching Netflix. So there's a ton of competition out there and Disney and Apple add a little bit more, but frankly I doubt it it will be material, because again there's already so many competitors for entertainment time, which is great for consumers and it's exciting for us.