Rail behemoth CSX (NASDAQ:CSX) didn't improve overall volume during the first quarter of 2019, but the company compensated for flat traffic by pricing into demand and continuing to operate as one of the most efficient railroads in North America. Shares rose as much as 6% on Wednesday in the first trading session following the release of CSX's earnings report. Below, I'll review the headline numbers and key success factors of the last three months. Note that all comparative numbers in this article are presented against the prior-year quarter. 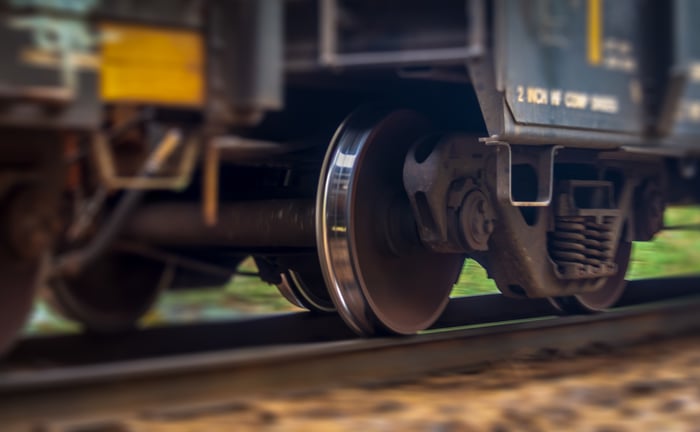 In CSX's earnings press release, CEO James Foote lauded the organization's ongoing success and vigorous start to the new year: "The CSX team of exceptional railroaders continues to execute across all aspects of our business, delivering new all-time high service levels. These results reflect the strength of our Company's operating model and our commitment to providing a best-in-class service offering to our customers."

Foote's comments figure as more than idle praise. Last year, CSX set a record among U.S. Class 1 railroads by generating a full-year operating ratio of 60.3% -- this quarter's operating ratio of 59.5% is a sequential decrease against last year's formidable productivity base. CSX is also slowly but surely improving on its safety record: The company's reportable personal injury and train accident frequency rates decreased by 32% and 35%, respectively, this quarter.

CSX doesn't provide investors with earnings guidance. Yet its near-term prospects appear to be quite bright. Management has made difficult decisions in its rather strict implementation of precision scheduled railroad (PSR) principles, such as trimming the company's workforce. Average first-quarter 2019 head count of 22,194 represented a 5.5% decrease over the first quarter of 2018.

But this intense adherence to the railroad's productivity plan has enabled tremendous improvements in net earnings and cash flow since the launch of the PSR drive in late 2017. As long as the U.S. economy continues in its current mode of moderate expansion, CSX has the opportunity to drive efficiency and profits even higher.