Canopy Growth (NYSE:CGC) enjoyed its best quarter in the company's history when the Canadian marijuana producer reported its third-quarter results in February. Revenue soared 256% -- not from the prior-year period but from the previous quarter. Canopy even posted a nice profit, although this achievement was only made possible by a big decline in the fair value of its senior convertible notes in Q3.

Conventional wisdom is that Canopy's upcoming quarter should be even better. The company will have a full quarter of adult-use recreational marijuana sales, compared to roughly 2 1/2 months of adult-use sales in Q3. Canopy also introduced its softgel capsules at the end of the last quarter. It makes sense that higher sales for the popular products would be on the way.

But hold the presses. One investment firm just slashed its revenue estimates for Canopy Growth. Here's why -- and what it could mean for Canopy and other Canadian marijuana stocks. 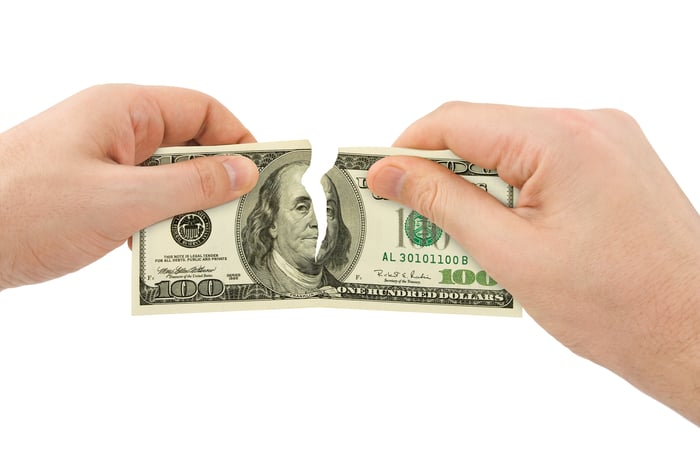 Scotiabank now expects Canopy Growth will report Q4 revenue of 87 million in Canadian dollars, 26% less than its previous revenue estimate. If this new prediction proves to be accurate, it would mean that Canopy's sales will increase by less than 5% from the second quarter.

For many companies, quarter-over-quarter revenue growth of close to 5% would be something to celebrate. But not for Canadian marijuana producers. Nearly everyone expected some hiccups in the first quarter of adult-use recreational sales. However, many also anticipated that sales in 2019 would really begin to pick up momentum.

Why such pessimism? Scotiabank's Oliver Rowe and Ben Isaacson wrote to investors that the Canadian cannabis industry is experiencing "teething pains." They pointed to data showing lower overall adult-use recreational marijuana sales in January 2019 than in December 2018.

Scotiabank's lower revenue estimate was only for Canopy Growth, but the reasoning behind the cut extends to other marijuana producers. Rowe and Isaacson think that Canopy Growth's revenue will be weakened in the quarter ending March 31, 2019, in part because there have been fewer retail cannabis store openings than anticipated, the availability of adult-use recreational cannabis products remains limited, and medical cannabis demand is flat, at best.

All of these factors affect Canopy Growth's top rivals, including Aurora Cannabis (NYSE:ACB), Aphria (NASDAQ:APHA), Cronos Group (NASDAQ:CRON), and Tilray (NASDAQ:TLRY). The headwinds arguably impact these companies even more than they do Canopy.

Canopy Growth commanded the largest market share last quarter. The company has stronger supply agreements in place throughout Canada than any of its peers. Only Aurora is in the same league as Canopy in terms of production capacity. If Canopy Growth gets a cold, most of its rivals will get the flu.

Remember also that Cronos Group and Tilray posted results for the quarter ending Dec. 31, 2018 that disappointed investors, to some extent. Canopy Growth and Aurora Cannabis were, by far, the biggest winners in the initial quarter of adult-use recreational marijuana sales. And the primary differentiator was the two companies' higher production capacity.

Aphria has already announced results for its quarter ending Feb. 28, 2019. Those results were much lower than expected. However, the reasons behind Aphria's dismal performance shouldn't affect other marijuana producers.

Should investors throw in the towel on Canopy Growth and other marijuana stocks? Of course not. It's possible that Scotiabank's outlook could prove to be overly pessimistic. More importantly, there's a bigger picture than just one quarter or even just one market.

Despite Aphria's disappointing quarterly results announced on Monday, interim CEO Irwin Simon said the company still thinks that sales of $500 million Canadian dollars in 2019 and CA$1 billion in 2020 are attainable. Constellation Brands CEO Bill Newlands stated on CNBC last week that its partner, Canopy Growth, could rack up more than $1 billion in sales by the end of its next fiscal year.

There are several reasons behind this optimism. The Canadian market for cannabis edibles and beverages is expected to launch later in 2019. Medical cannabis markets across the world are expanding rapidly.

Scotiabank is probably right that the Canadian adult-use recreational market is experiencing some "teething pains." But teething pains in babies are only temporary. That's likely to be the case for any headwinds for Canopy Growth and other marijuana producers with their upcoming quarterly results.