HP (NYSE:HPQ) isn't a high-growth company. A top maker of PCs and printers, it's expected to see its revenue grow only by 0.7% this year, followed by a slight acceleration to 1.1% next year.

While HP isn't a fast grower, the business itself is extremely lucrative. Over the past 12 months, HP has raked in $3.79 billion in free cash flow. Incidentally, the stock itself on a price-to-free cash flow basis is quite cheap, trading at just over eight times that trailing 12-month free cash flow figure. 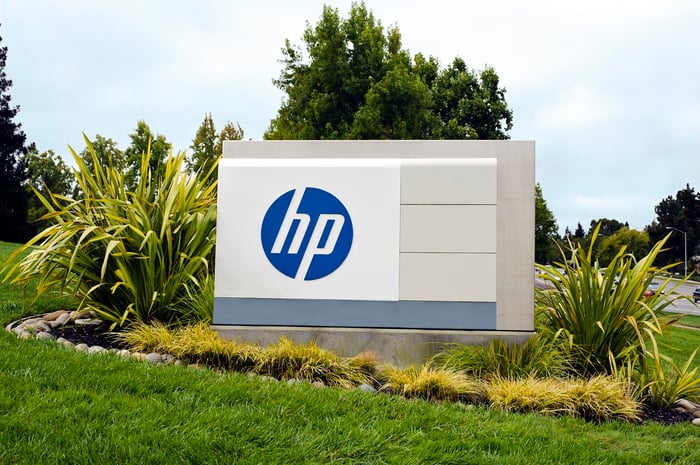 While HP's capital return program is certainly robust, I think the company could make its stock more attractive if it were to shift more of its capital return efforts toward the dividend. Here's why.

There are some good reasons for why HP would want to focus its capital return efforts on the buyback instead of the dividend. Share repurchases arguably have a more lasting impact on a company's stock, since the resulting reduction in share count has a permanent impact on earnings per share (EPS). Ideally, the reduction in share count should translate to a higher share price, but it's hard to determine if that theoretical impact manifests itself in the real world.

Another advantage of share repurchases is that they can be easily modulated. If a company wants to, say, make a large acquisition or if times simply get tough, it can scale back or even suspend its share repurchase activity without causing too much of a ruckus. Cutting or suspending a dividend, on the other hand, isn't a good look.

With that all being said, a company that offers a large and growing dividend can be very attractive to income-oriented investors. Keep in mind that HP isn't a hot growth stock, so many tech investors may simply steer clear of it for that reason. HP is the kind of stock that should be attractive to value investors given its very cheap valuation. The company's current dividend yield of about 3.17% should at least get it onto the radar of dividend investors.

The problem, though, is that while HP's dividend yield is high, it's not high enough -- at least at the current share price -- to get dividend investors rushing in. There are tech companies out there with larger dividend yields and either similar or even better growth prospects than HP's.

If HP were to, say, commit to giving back half of its free cash flow to shareholders in the form of a dividend, then, at the current stock price, its dividend yield would nearly double. A yield like that -- especially considering that it would be backed by HP's solid business fundamentals -- could serve to make the company one of the most attractive income investments in tech. The shares, in turn, could be rewarded with a higher multiple, driving share price appreciation, too.

If HP were a company with robust long-term growth prospects, then it wouldn't be so important for it to focus on trying to sweeten its shares with, say, a large dividend. However, considering that HP's growth prospects over the next couple of years look modest at best (and even a significant acceleration from current growth levels could still mean low- to mid-single-digit revenue growth), it needs to find other ways to get investors to bet on its stock. A much larger dividend could do the trick.