Please ensure Javascript is enabled for purposes of website accessibility
Log In Help Join The Motley Fool
Free Article Join Over 1 Million Premium Members And Get More In-Depth Stock Guidance and Research
By Asit Sharma – Apr 18, 2019 at 10:32AM

An unchanged top line in first-quarter earnings is mitigated by a solid margin performance.

Flow instrumentation and water meter manufacturer Badger Meter (BMI -2.74%) revealed mixed first-quarter 2019 results on Wednesday. Revenue was virtually unchanged against the prior year, yet both operating profits and net income soared during the last three months. Below, we'll review condensed financial results and dig into the quarter's salient details. Note that all comparative numbers are presented against the prior-year quarter.

What happened with Badger Meter this quarter? 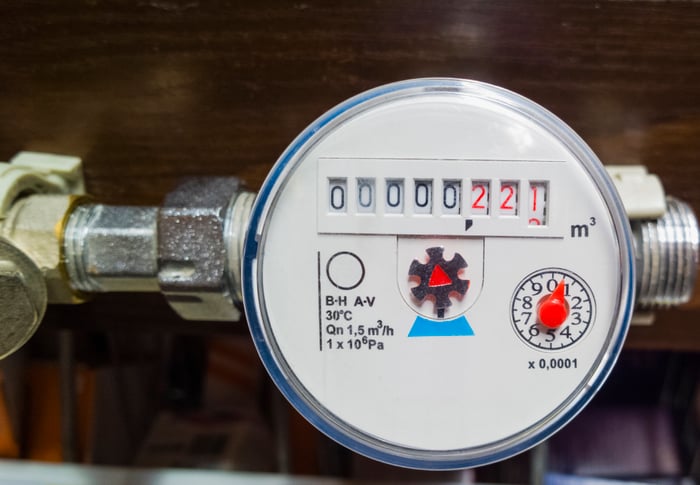 During his prepared remarks in Badger Meter's earnings conference call, CEO Kenneth Bockhorst noted that both Columbia and Aurora are larger cities that chose the company's comprehensive smart water solution after extensive reviews of competing systems. Bockhorst highlighted the benefits to these and similar municipalities as a way of emphasizing future revenue opportunity for Badger Meter:

They chose Badger Meter for a variety of reasons, most important of which is our infrastructure-free cellular offering. The market is becoming more knowledgeable about the benefits of cellular in part from the Smart Cities enthusiasm, but also because of the demonstrated benefits our customers are realizing. This is translating into commercial increase and contract wins. Our ORION LTE-M cellular radio offering is 5G compatible and will improve battery life, extend the range, lower costs and increase the number of daily on-demand reads and functionality for utilities.

An interesting point to note on these two awards is that both cities will continue to use our industry-leading Recordall mechanical meters. At the core of our business is a customer-centric focus and our unique ability to provide a broad array of offerings on the meter and radio fronts. We believe this provides us with a strong competitive advantage. At the end of the day, choice does matter.

Management doesn't share forward quantitative earnings guidance, but in the company's earnings press release, Badger Meter stressed qualitative factors behind a positive outlook for the remainder of the year, including a solid backlog and order rates and heightened customer interest in new, larger versions of E-Series Ultrasonic meters and ORION Cellular LTE-M radios.

The company also hinted at near-term capital deployment, pointing out in the release that a strong balance sheet will support key growth initiatives, including tuck-in acquisitions. Thus, in addition to expected progress on the top line, shareholders may see some moderate, strategic merger activity from Badger Meter later this year.

Badger Meter Is Rebounding in the Back Half of the Year