Please ensure Javascript is enabled for purposes of website accessibility
Log In Help Join The Motley Fool
Free Article Join Over 1 Million Premium Members And Get More In-Depth Stock Guidance and Research
By Billy Duberstein – Updated May 10, 2019 at 7:58AM

And the bank has an impressive 17-quarter streak getting results.

Bank of America (BAC 0.24%) recently reported its first-quarter earnings, which trounced analyst expectations. Yet while earnings per share of $0.70 handily beat consensus estimates of $0.66, the bank's stock was immediately down a few percentage points after the release (though it has rebounded as of this writing). In addition, some analysts actually downgraded the stock after the company's report and conference call.

The culprit is the usual concern for the beaten-down banking sector -- investors continue to worry we're nearing the end of the current economic expansion, with a more challenging interest-rate environment due to a flat yield curve. Banks benefited toward the end of last year due to higher interest rates on loans, but with the Federal Reserve now on "pause," investors think that bank margin expansion may be over ... and could potentially reverse. Bank of America did face some pressure on margins in the first quarter, along with a challenging capital markets and investment banking environment. In fact, the company's revenue was slightly down year over year.

And yet there's a lot more to Bank of America's story than the net interest margins it earns on loans. In fact, Bank of America management often highlights a different, non-standard metric in earnings presentations that is arguably much more important to investors. 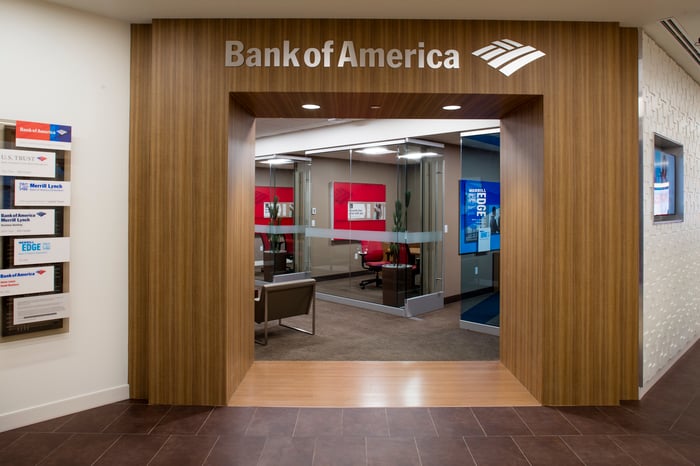 This is important because the highlight of CEO Brian Moynihan's strategy over the past few years has been one of strict cost cuts, combined with technology investments to increase efficiency. Though Moynihan's strategy also calls for revenue and loan growth, those targets are more modest, at GDP (Gross Domestic Product) plus 1 to 2 percentage points. Growing too fast can be dangerous for a bank, and as one of the largest banks in America, Moynihan is determined to grow responsibly.

The good news for shareholders is that the company achieved its 17th straight quarter of positive operating leverage in the first quarter, clocking in at 4%. The first quarter's operating leverage came entirely on the expense side, with non-interest expense declining over 4%. But that's not abnormal: Due to the lumpiness of the bank's sales & trading and investment banking businesses, Bank of America has had six quarters in the past four years in which it's experienced revenue declines. Yet in all of those quarters, it's been able to cut expenses by an even greater amount, keeping the operating leverage streak alive.

Impressively, the company's efficiency ratio, which tracks non-interest expenses as a percentage of revenue, fell from 60% to 57% year over year. Such a big decline is hugely impressive for such a large bank.

While GDP-plus doesn't sound particularly enticing to many, the focus on cost cuts and safe loan growth can make for surprisingly exciting earnings-per-share growth. Even in a quarter when revenue was slightly down, the company's operating leverage, combined with ample stock repurchases over the past year, allowed Bank of America to grow its EPS by a whopping 13%.

It's not often that you see a company grow EPS by 13% while its revenue is down, but that's what's happening with Bank of America, thanks to Moynihan's ruthless cost-cutting and huge stock buyback program.

Can the streak continue?

In light of the current flattish yield curve, Management did guide for the company's net interest income to slow to 3% in 2019 -- about half the 6% growth rate posted in a strong 2018. In addition, the company did predict some headwinds in the second quarter, with the potential for sequential declines in net interest income, due to mortgage prepayments. However, management expects these second-quarter headwinds to be one-off declines, with a rebound in the second half.

Bank of America's conservative strategy isn't garnering much love on Wall Street -- the company trades at just 11.5 times trailing earnings and 9.5 times forward earnings. However, showy and exciting growth numbers can potentially lead to danger in the banking industry. But if Bank of America can continue to grow EPS by double digits -- a rate higher than its current PE multiple -- patient investors could be in for exciting returns.