Please ensure Javascript is enabled for purposes of website accessibility
Log In Help Join The Motley Fool
Free Article Join Over 1 Million Premium Members And Get More In-Depth Stock Guidance and Research
By Daniel B. Kline – Apr 18, 2019 at 5:14AM

More than a third don't expect to be financially independent by the time they're 30.

America's teenagers have a lot on their minds. They worry about school, about fitting in, about guns, about the environment, about just figuring out who they really are. But given that for the most part, mom and dad are still paying the bills, you might be surprised at how many of them are already worrying about money and their financial futures.

According to a new survey from Junior Achievement and Citizen's Bank, fully 45% of teens say they're worried they won't be able to afford to live on their own when they reach adulthood, while 47% are worried about paying for college. The study also showed that 40% worry about finding a fulfilling, well-paying job, and 33% are concerned that they don't know enough about how to manage money.

"These survey findings show a disconcerting lack of confidence among teens when it comes to achieving financial goals," said Jack Kosakowski, CEO of Junior Achievement USA, in a press release. "With a strong economy, you would think teens would be more optimistic. It just demonstrates the importance of working with young people to help them better understand financial concepts and gain confidence in their ability to manage their financial futures." 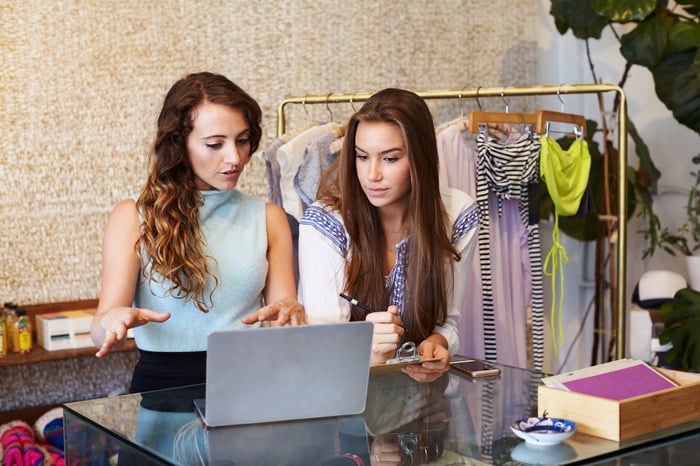 It's important for adults to talk with teens about money. Image source: Getty Images.

Considering the historically low unemployment rate in the U.S. today, there's a fair amount of pessimism baked into the fact that 62% of those surveyed listed just getting a full-time job as one of their top financial goals for the future -- making it the most common response. A similar percentage of teenagers (59%) said that graduating from a four-year school was a top goal. And 53% want to reach a level of financial independence such that they're no longer relying on monetary help from their parents. But 37% said they don't expect to hit that last milestone before they are 30.

In the slightly longer term, 74% of teenagers believe they'll own a car by the time they are 30, but only 60% expect to own a home at that age. In addition, 44% of those surveyed expect to be saving for retirement by the time they hit 30, while 43% expect to have their student loans paid off.

"It's clear that more has to be done to help prepare students for the future -- whether it is through helping them navigate paying for college or educating them on how to manage their money by establishing savings and checking accounts," said Citizen's Bank President of Consumer Deposits and Lending Brendan Coughlin in the press release.

As a parent, it's important to start talking to your offspring about money early. They need to understand the value of a dollar, and where their family stands. Is paying for college something you can afford, or will your child need to find other options? And how much will that depend on which school they choose? (Your in-state university? We can swing it. Columbia University? Sorry, kid, but no.) Are you in good shape financially, or are your household finances a mess?

Teenagers need to understand how money is earned, and the consequences of making various financial choices. It's possible for anyone -- even someone of modest means -- to go to college, land a good job, and achieve financial independence, but doing so is far easier if you really understand the impact of the choices you make along the way.

Parents should actively involve their children in financial discussions, and set a good example. A kid who watches mom or dad constantly buy things they can't afford or make other careless money decisions will be more likely to mimic those behaviors later.

It's important to teach our kids that reaching long-term financial goals requires sacrifices on the instant-gratification front. You may not take that exotic vacation, or drive the car of your dreams, but your children need to see that if those decisions are part of a plan that leads to financial security, the sacrifices will be well worth it.