Please ensure Javascript is enabled for purposes of website accessibility
Log In Help Join The Motley Fool
Free Article Join Over 1 Million Premium Members And Get More In-Depth Stock Guidance and Research
By Daniel Miller, Jeremy Bowman, and Jordan Wathen – Apr 19, 2019 at 11:18AM

As more and more investors and analysts predict an imminent market downturn, here are three defensive stocks to consider.

After years of consistent economic growth, and dramatic stock market increases, a growing number of investors, economists, and analysts are predicting a recession and downturn within the next couple of years. When we asked three Motley Fool contributors what defensive stocks they would consider buying before the next market crash, Waste Management (WM 0.27%), Constellation Brands (STZ 0.31%), and Berkshire Hathaway (BRK.A 0.35%) (BRK.B 0.40%) were at the top of their lists.

Daniel Miller (Waste Management): If you're looking for safer stocks to own in the event of a swift downturn or market crash, investors would be wise to find companies with a business model that will remain resilient. One perfect example is Waste Management, the leading provider of waste management environmental services in North America and owner of landfill facilities. Regardless of how the economy or stock market is doing, America will still need Waste Management's services, and that means the company's business will remain healthy over the long term.

Investors should first consider Waste Management's long-term competitive advantages. We often overlook, or are just unaware, that there are significant barriers of entry to Waste Management's business. Operating a landfill, for instance, requires facility permits, a number of licenses, and federal and local government approvals for zoning and other environmental concerns. Add to those hurdles the fact that many populations don't want a new landfill in their backyard and that Waste Management has a cost-efficient and dense route structure, and it's easier to understand that Waste Management has a nice niche carved out in the waste services industry with new competitors less likely to pop up. 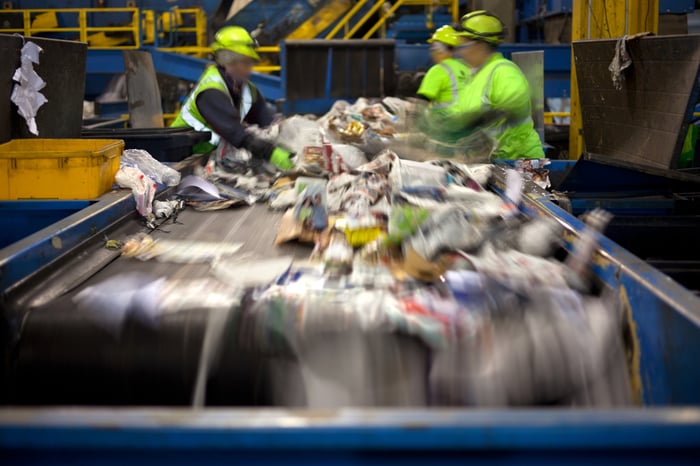 Waste Management should be well positioned as the nation's population increases and we produce more trash, but management is also willing to pull the trigger on acquisitions that fold nicely into the company's business model. Just this week, it announced it would acquire all outstanding shares of Advanced Disposal Services for $33.15 per share in cash. Waste Management believes it can generate more than $100 million in annual cost savings and capital expenditure synergies, and the acquisition will be immediately accretive to its adjusted earnings per share and cash flow.

Regardless of what happens with the market, we're almost guaranteed to need Waste Management's services, and that makes it a stock to own before any potential market crash or downturn.

A good way to drown your sorrows

Jeremy Bowman (Constellation Brands): Though it may surprise some investors, alcohol stocks actually tend to outperform during a recession as people turn to vices and distractions like alcohol, cigarettes, movies, and video games during tough times.

Given its diversified position in alcohol with medium-to-high-priced wines, spirits including Svedka vodka and High West whiskey, and beers like Modelo and Corona brands, as well as craft beers like Ballast Point, Constellation has a good defensive position to withstand a market crash. In addition, its exposure to the marijuana industry through its 39% stake in Canopy Growth (NYSE: CGC) also provides an upside as marijuana legalization in the U.S. is likely to get a push during a recession as governments look for additional tax revenue.

Canopy has also set itself up to take advantage of U.S. legalization with a deal to take over Acreage Holdings once cannabis becomes legal in the U.S.

Furthermore, Constellation is already trading at a discount and management has pledged an aggressive share buyback program. The stock is down about 14% from a year ago as investors balked at its $4 billion deal with Canopy and slowing earnings growth due to problems in its wine business. However, the company took a big step to solving both of those problems with the sale of its lower-end wine business for $1.7 billion to E&J Gallo, ditching a drag on its growth and shoring up its balance sheet.

Finally, Constellation is a prolific acquirer of brands, and a market crash should present ample opportunity for bargain-priced acquisitions, putting the company in a stronger position once the economy returns to growth.

Jordan Wathen (Berkshire Hathaway): If there's one company that tends to exit crises in a better position than it entered, it's Berkshire Hathaway. The conglomerate run by Warren Buffett is undoubtedly one of the world's best acquirers, built by buying businesses at low prices during market panics.

Buffett has snubbed his nose at major acquisitions in recent years, citing high prices for businesses that he describes being of only "decent" quality. Instead, Berkshire is accumulating cash at an extraordinary pace, considering that its $112 billion of cash makes up roughly one-third of book value. To put it another way, Berkshire's cash position would enable it to make its largest-ever acquisition (Precision Castparts) roughly three times over.

Few businesses get better when things turn for the worse, but Berkshire Hathaway is undoubtedly one of them. A rapid decline in stock prices would enable Berkshire to finally put cash to work and make the elephant-sized acquisition Buffett has long waited for. But it's not just about the capacity to make a deal -- it's also about who is doing the buying. With more than a century of collective stock-picking wisdom between Buffett and Charlie Munger, it's hard to imagine a better management team to allocate capital on your behalf.

Is This Move a Hint at Berkshire Hathaway's Succession Plan?
356%