Adloop Media, which offers an advertising-technology platform that serves the cannabis industry, just released a report that analyzed details of ad spending on its platform leading up to 4/20 in 2019. Adloop drilled down into the demographics of cannabis consumers to determine which companies were spending more of their advertising dollars. There were three surprising targets for this increased advertising spending this 4/20 day. 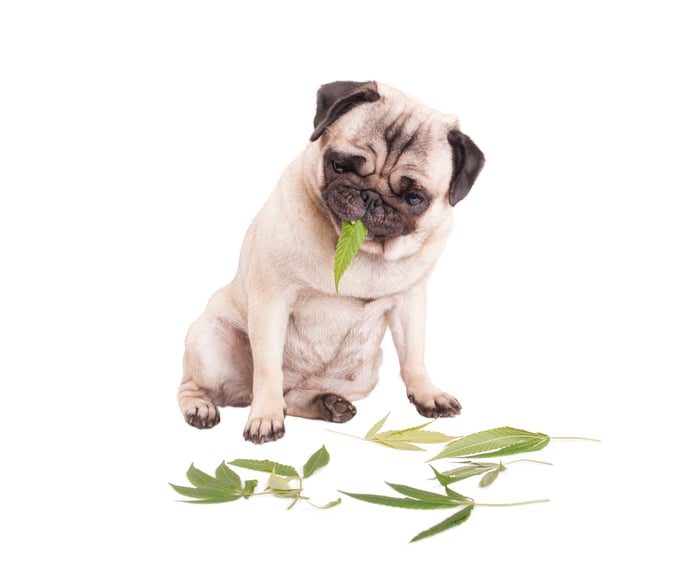 Adloop found that advertisers are boosting their spending on pet owners by more than 125% compared to last year. In particular, companies are promoting pet treats that contain cannabidiol (CBD). There also appears to be a heavier focus on advertising for CBD-infused liquid drops and sprays that help with conditions including behavioral issues, itchy skin, and joint mobility.

Perhaps the biggest change from 2018 is for brands that are increasing ad spending targeting owners of pets with anxiety. Adloop's data revealed that advertising spending on this front will increase by 175% year over year.

More companies in the U.S. and in Canada are setting their sights on the pet market. Canopy Growth (NASDAQ:CGC), for example, announced in February that it was teaming up with lifestyle maven and entrepreneur Martha Stewart to develop hemp-based CBD products, with an initial focus on pet CBD products.

You might also be surprised to learn that companies are targeting moms for increased ad spending this year. Advertising focused on mothers has soared more than 150% in the months leading up to 4/20 in 2019 compared to the same period in 2018.

What products are companies hoping moms will purchase? Adloop's data showed that the top products were CBD oils for helping alleviate anxiety, nausea, migraines, and insomnia.

But there's also an increased focus on CBD products for physical fitness. Adloop's report stated that advertising on CBD physical-fitness products tripled year over year in states such as California, Colorado, and Oregon, where recreational-marijuana use is legal. Mothers ages 25 to 35 are the primary target audience for advertising these products.

Perhaps the most surprising focus of higher advertising dollars this year is on baby boomers. Support for cannabis legalization has historically been the lowest among older Americans. However, an AARP survey conducted last year found that support for marijuana use is definitely rising in this demographic group.

Adloop's study found that baby boomers ages 65 and up are "flocking to CBD products in incredible numbers." CBD advertisers are spending more than 75% of their total market budget on marketing to individuals in this group. Adloop said that advertisers on its platform spent only $50,000 on older Americans last year, but in 2019, that figure has skyrocketed to around $1 million -- a whopping 1,900% year-over-year jump.

As you might expect, baby boomers aren't going for the same kinds of products as younger individuals are. Instead, ads targeting older Americans are primarily for products such as CBD creams, CBD oils, and ingestible products for chronic pain and other ailments.

And one unsurprising audience

While pet owners, moms, and baby boomers could be somewhat surprising target audiences for increased cannabis advertising, there's one group that won't be a surprise at all: millennials. Although men continue to be the biggest buyers of cannabis products, Adloop said that millennial women are the fastest-growing demographic.

Because of the rapid rise in the use of cannabis products by millennial women, advertisers are focusing much more of their spending on them. Adloop found that around 60% of a typical advertising budget is being targeted toward women, a 20% increase from 2018.

Millennial women tend to prefer more expensive cannabis products, as well as health-focused products such as CBD topicals. Millennial men, on the other hand, gravitate more toward vapes and pre-rolled joints. Adloop stated that vape-pen advertising to millennial men has soared more than 400% since 4/20 in 2018.