The ad-supported service for Alexa devices creates yet another competitive front for Spotify to fight on.

Amazon (AMZN 0.24%) quietly launched a free, ad-supported music streaming service last week for owners of the company's Alexa-enabled devices (like its Echo smart speakers). This new service is similar to the Amazon Music streaming service (free for Prime Members) and offers access to about 2 million songs through playlists and music stations. The Amazon Music Unlimited service the company offers for a $7.99 monthly subscription offers access to more than 50 million songs.

Amazon hopes to use the service as a way to keep customers tied to its ecosystem and even boost its advertising ambitions. While the new service will likely have little impact on Amazon's overall business, it has already had an impact on Spotify (SPOT 0.74%). The company's share price dipped 4% to 5% last week on rumors that Amazon was launching the music service, and it hasn't rebounded yet.

Here's why Spotify's shareholders should be a bit concerned. 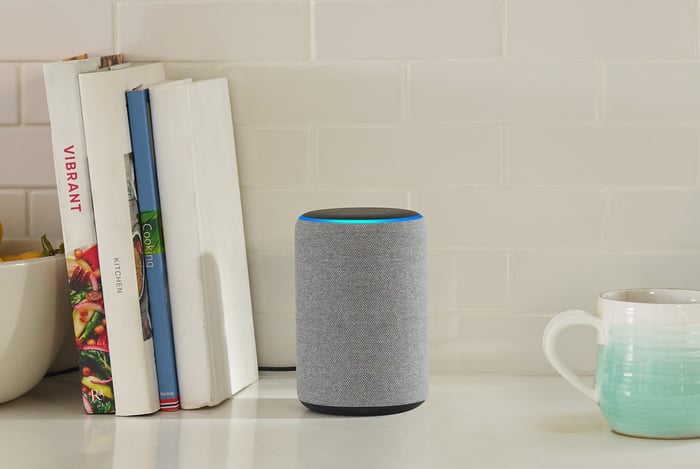 Why this is bad for Spotify

Spotify is a music streaming behemoth with 207 million worldwide monthly active users, including 96 million paid subscribers. The massively popular service has a strong product offering that may seem bulletproof to competition at this point, especially from companies that appear to be just dabbling in music streaming services, like Amazon. But there are some reasons why Spotify investors should take notice of Amazon's recent move.

Spotify uses its free, ad-supported service as a way to introduce users to what it has to offer with the hope that they'll upgrade later to the company's paid service. For Alexa users, Amazon may keep some segment of music streamers from even considering trying out Spotify and thus cut off that subscriber inroad.

And while Amazon is currently limiting its ad-supported music streaming service to Alexa-enabled devices, nothing is stopping the company from opening up the service to smartphone users too. If the company believes that giving free music to non-Prime members on smartphones is a good way to draw them into its ecosystem, then Amazon could easily expand the service. That would be a blow to Spotify, as smartphones are how the service reaches a big segment of its subscribers now.

Additionally, Spotify is directing nearly 70% of its yearly revenue right now toward paying for music streaming rights, and there's no sign of that improving. The company needs to continually boost its subscription sales to cover those costs as it works toward becoming profitable. Meanwhile, competitors like Apple and Amazon have deeper pockets to help cover expenses and can afford to take more time to eventually earn money from their services.

While Amazon's new music streaming service won't be the one thing that topples Spotify's streaming dominance, it's creating yet another competitor that Spotify will have to account for in its efforts. With Apple Music becoming a bigger threat and music streaming rights continually putting financial pressure on Spotify's business, Amazon's new service will undoubtedly add to the company's stress.