Please ensure Javascript is enabled for purposes of website accessibility
Log In Help Join The Motley Fool
Free Article Join Over 1 Million Premium Members And Get More In-Depth Stock Guidance and Research
By Reuben Gregg Brewer – Apr 22, 2019 at 9:35AM

Realty Income is a great company, but it's priced for perfection. Here are two high-yield net lease REITs that aren't quite as dear.

A great company can still be a bad investment if you pay too much for it. That's exactly the situation today with Realty Income (O 0.91%). But it's not the case for every net lease real estate investment trust (REIT). If you'd like to add a solid dividend-paying property owner to your portfolio, then you'd probably be better off skipping high-priced Realty Income and taking a look at this pair of net lease REITs instead.

There are no two ways about it: Realty Income is a great company. For starters, the net lease business model underpinning its business is relatively low risk. Essentially, the REIT owns properties for which its tenants are responsible for most of the operating costs. It has a huge portfolio of nearly 6,000 properties spread across 49 states. Although roughly 80% of its rents come from retail tenants, it has long-term leases and a long history of maintaining occupancy in the high 90% range. And it has an investment-grade-rates balance sheet. 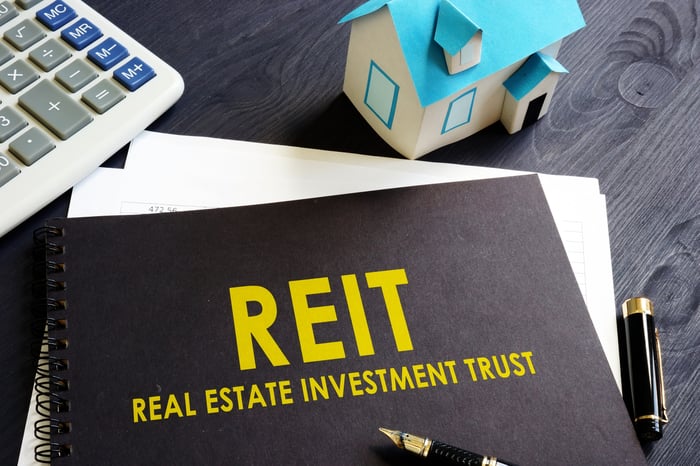 If that isn't enough to entice you, it has increased its dividend, which is paid monthly, every year for 27 consecutive years. Within that streak is another one: Realty Income has upped its dividend every quarter for 85 consecutive quarters. And there are likely to be more increases to come, because based on the company's estimate for 2019 adjusted funds from operations (FFO), its payout ratio is a reasonable 80% or so. Over the last decade, dividend growth has averaged around 4.5%, enough to keep the buying power of dividends ahead of the historical growth rate of inflation.

So what's the problem? Everyone knows just how great Realty Income is, and the price has been bid up accordingly. The yield is a miserly 3.7%, near the lowest levels ever for the REIT. The trailing price-to-AFFO ratio is a hefty 21 times. Its price-to-projected 2019 AFFO ratio is equally elevated at 20.5 times, assuming management can hit the high end of its guidance range. Those are numbers you'd expect to see from a growth company, not a tortoise-like income stock built to return value to shareholders via a slow and steadily growing dividend stream. (Realty Income actually calls itself the "monthly dividend company"!) It's a great REIT for sure, but investors would be better off keeping it on their wish list than buying it today.

However, that doesn't mean you need to avoid the net lease space altogether. There are other options to consider, like W.P. Carey (WPC 0.60%) and VEREIT (VER). There are notable differences here, but if you get to know the businesses a little better, you're likely to find that one or both could fit well in your income portfolio today. 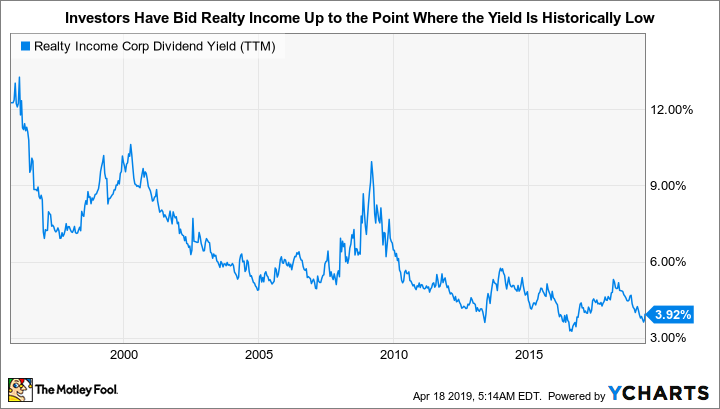 Carey is one of the oldest net lease players in the business. For a long time, it operated with a fairly complex structure, including structuring itself as a limited partnership and running an asset management business that created and managed nontraded REITs. It's converted to a REIT and is nearly done closing down the asset management division. At this point, it's really a boring old net lease REIT with a high occupancy rate.

While smaller than Realty Income, with a portfolio of around 1,200 properties, it has an incredible track record of its own. To cut to the chase for dividend investors, Carey has increased its dividend every year for 22 consecutive years, with an annualized growth rate of around 7% over the past decade. The dividend has grown more slowly in recent years, but that's partly because of management's opportunistic approach. It only likes to invest when it thinks it can get a bargain and, further, prefers to originate its own leases so it can dictate the lease terms.

That said, there is one huge difference between Realty Income and W.P. Carey: diversification. As noted above, Realty Income is heavily focused on the retail sector. Carey's portfolio is spread across office (25% of rents), industrial (23%), warehouse (21%), retail (18%), and "other." Moreover, it generates roughly a third of its rents from foreign markets, mainly Europe. Realty Income is basically focused on the U.S. market. This broad diversification allows Carey to put its money to work wherever it sees the most opportunity. For example, it has specifically avoided U.S. retail (4% of rents), preferring to invest in European retail (around 14%), where there are simply fewer stores than in the U.S. 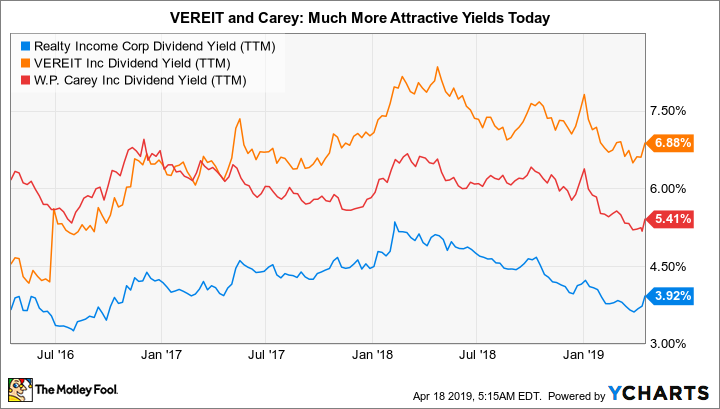 And Carey's dividend yield is a far more attractive 5.2%. Valuation wise, the REIT's price-to-projected 2019 AFFO ratio is roughly 15.5, assuming it can hit the high end of its targets. That's a much more attractive valuation than the over-20 price-to-projected AFFO at Realty Income. However, if you are willing to dig in a little bit and take on some uncertainty, VEREIT's price to projected AFFO is even lower, at roughly 11.5 times, again assuming it hits the high end of its targets. VEREIT's dividend yield, meanwhile, is 6.5%.

That extra yield comes with some issues; however, VEREIT is steadily working through the problems. VEREIT, previously known as American Realty Capital Properties, was built via rapid-fire acquisitions that, ultimately, caught up to the management team at the time and, coupled with an aggressive corporate culture, led to a small accounting error. The stock tanked, the dividend was suspended for two quarters, and investor trust was basically eviscerated. Industry veteran Glenn Rufrano was brought in to right the ship.

Rufrano and his team laid out specific goals for investors to track, including streamlining the portfolio, jettisoning complicated business (it once originated and managed nontraded REITs as well), and improving the balance sheet and regaining investment-grade credit ratings. Management has delivered on all fronts, and after several years of rejiggering the portfolio, it looks like growth may be back in order for the roughly 4,000-property-strong business with high-90% occupancy rates. (Like Carey, the portfolio is diversified across industrial, office, and retail properties, but it doesn't invest overseas.)

The problem is that VEREIT is still working through legal issues left behind from the accounting tangle. That said, progress is being made. The company has settled with owners of roughly a third of the shares for around $250 million. Extrapolating that out, it looks like the issue could end up costing, conservatively speaking, around $1 billion. That's a hefty sum for sure, but the company entered 2019 with more than that available on its revolving credit facility. In other words, it looks like it can handle the hit. Add in a payout ratio in the low 80% range, and there's little risk to the dividend. That said, dividend growth isn't likely to resume until the legal issues are fully taken care of.

VEREIT isn't for everyone. But if you can handle a little uncertainty and are willing to keep tabs on your investments, it offers a high yield from a large and relatively cheap net lease REIT.

Realty Income is a great REIT. But at this point, its price is so high that it really isn't worth buying for most investors. If you want to put it on your wish list and hope for a market downturn that drags this well-run REIT with it, well, that's a good plan. However, you can find alternatives if you are willing to do some digging. W.P. Carey and VEREIT are two that are worth some extra legwork. They aren't exactly the same, but they are much cheaper and have much more enticing yields.