Please ensure Javascript is enabled for purposes of website accessibility
Log In Help Join The Motley Fool
Free Article Join Over 1 Million Premium Members And Get More In-Depth Stock Guidance and Research
By Daniel B. Kline - Apr 22, 2019 at 1:04PM

The company may help bring accounts to millions of unbanked households.

About 8.4 million American households were "unbanked" in 2017, according to a report from the FDIC. That means those households -- 6.5% of the American population -- lack access to a checking or savings account.

A new product from T-Mobile (TMUS 0.84%) may help to change that. That's not the stated goal of T-Mobile Money, a new checking account being offered by the wireless carrier (available to anyone, not just its customers). It may, however, be a happy side effect. 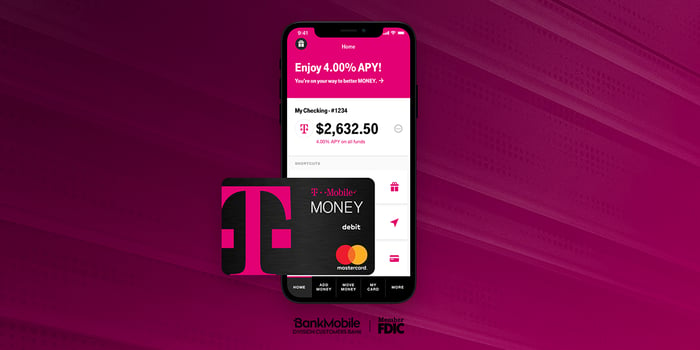 There are a lot of reasons people don't have a bank account. Some are wary of banks in general and others worry about making small mistakes that lead to overdraft charges. That's a problem T-Mobile is addressing with its new service.

The company pointed out that Americans paid $34 billion in overdraft charges in 2017. That's something the wireless carrier's checking account seeks to eliminate, and that might make it a very appealing product for those who lack a checking account.

T-Mobile Money (a partnership with BankMobile, a division of Customers Bank) offers fee-free accounts with what the company calls no monthly fees and no overdraft fees. In reality, T-Mobile Money allows accounts to go up to $50 in the red without penalty as long as the account holder brings it back to a positive balance within 30 days. To be eligible for that coverage, however, you will need to be a T-Mobile postpaid customer. (T-Mobile did not specify what the fees will be when account holders go more than $50 into the red or do not bring their balance positive by the 30-day limit. It also did not lay out fees for account holders who are not wireless customers.)

Still, while there are limits to T-Mobile's generosity, the account does come with no fees and requires no minimum balance. The checking accounts are FDIC insured up to $250,000 and come with a Mastercard-branded ATM card that can be used free of charge at more than 55,000 in-network Allpoint ATMs worldwide. T-Mobile won't charge at out-of-network ATMs either, but the owners of those machines may charge a fee.

In addition to trying to remove fees and overdraft concerns as a pain point, T-Mobile is also offering interest rates that are generally higher (in many cases a lot higher) than what the big banks are currently offering. Getting the best rates, however, requires the customer to be a T-Mobile postpaid customer, which the company explained in a press release: "T-Mobile postpaid customers can get 4% APY on balances up to $3,000 and 1% APY on every dollar over $3,000 when they sign up with their T-Mobile ID and deposit at least $200 each month. Everyone else scores 1% APY on all balances."

T-Mobile has clearly targeted big banks with this offer. It mentions Bank of America, Wells Fargo, and Chase in its press release. "Traditional banks aren't mobile-first, and they're definitely not customer-first. As more and more people use their smartphones to manage money, we saw an opportunity to address another customer pain point," said CEO John Legere in the release.

A beacon to the unbanked?

Clearly, T-Mobile Money will have the most appeal to T-Mobile postpaid customers. That's not a bad thing for the unbanked, however, because the No. 3 wireless carrier offers low prices and very clear pricing with no overages, and taxes and fees included in the published price.

By offering an easy-to-open checking account that's optimized for mobile use and has limited fees, T-Mobile's new feature may appeal to customers who have otherwise shunned banks. It's not entirely a no-fee proposition, but it does make it so small slip-ups don't result in overdraft charges. That's an attractive proposition even if you hadn't been avoiding banks out of fear of those charges.

3 Recession-Ready Stocks to Buy in September

Where the Money Is: January 22

7 Reasons T-Mobile Wants to Be Your Banker

Here's How a Sprint/T-Mobile Deal Could Affect American Tower Corp.