The company reiterated its full-year guidance despite multiple headwinds.

Appliance maker Whirlpool (WHR 0.58%) is navigating a complicated environment. A strengthening U.S. dollar is knocking down international sales because of currency translation effects, inflation from raw materials and tariffs is pushing up costs, and weak industry demand in North America is creating challenges in the company's core market.

Despite these headwinds, Whirlpool was able to put together a solid first quarter. The company did miss analyst estimates for revenue, but it produced better-than-expected earnings and reiterated its full-year profit outlook.

Total revenue was down in the first quarter on a year-over-year basis, but Whirlpool was able to grow its adjusted earnings:

Currency was the culprit behind Whirlpool's revenue decline. Excluding the impact of currency, total revenue would have increased about 1%.

North America, Whirlpool's most important region, saw sales rise 1% despite a 7% decline for the industry in the United States. Higher raw material prices, tariffs, and freight costs raised expenses by roughly $35 million, but that was offset by pricing and mix improvements. Whirlpool managed to boost its North America operating profit by 9%, quite a feat given the difficult operating conditions.

Overall, Whirlpool managed an adjusted operating margin of 6.3%, up from 6% in the prior-year period. 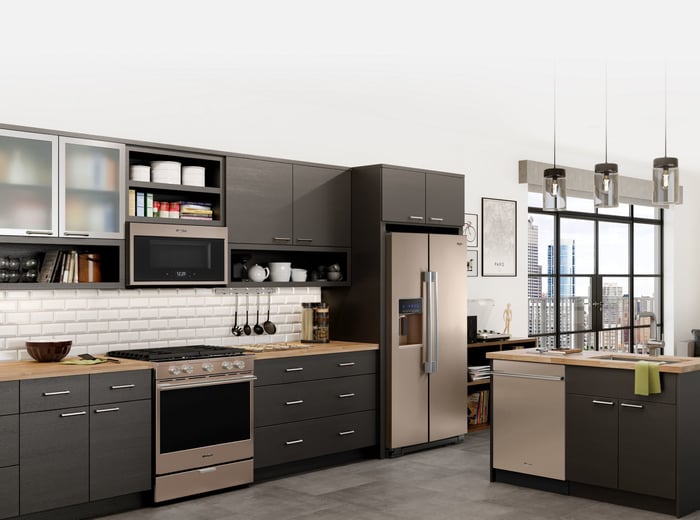 While the components of Whirlpool's full-year guidance shifted, the company left the headline figures unchanged. Whirlpool still expects to grow revenue on a constant-currency basis by about 3%, and it still expects to produce an adjusted operating margin between 6.5% and 6.8%. Adjusted earnings per share are expected between $14 and $15, and free cash flow is expected between $800 million and $900 million.

Whirlpool expects raw material and tariff inflation to be a smaller problem than it did three months ago. The company now sees a $200 million to $250 million cost increase, down from the $300 million cost increase it had previously indicated. This guidance includes all announced tariffs, so any new tariffs would throw a wrench in the company's outlook.

The improvement in raw material and tariff costs will be offset by lower expectations for unrelated cost reductions, mostly because of lower volume. Tough conditions in North America remain a problem for the company. The net result is an unchanged outlook for adjusted operating margin and adjusted earnings.

A combination of stronger margins in North America and the impact of share buybacks pushed up Whirlpool's per-share earnings in the first quarter. With tough conditions in North America, it's unclear how much further profitably can be improved. Worsening conditions, or additional tariffs that the company isn't accounting for in its outlook, could derail Whirlpool's full-year guidance.

Still, Whirlpool's results are holding up surprisingly well, given the environment the company finds itself in.