The craft brewer is still working hard on its popular Sam Adams brand, but its non-beer offerings are holding up the fort in the meantime.

With shares up 9% in after-hours trading right now, let's pour it all on the table for a better idea of how Boston Beer kicked off the new year. 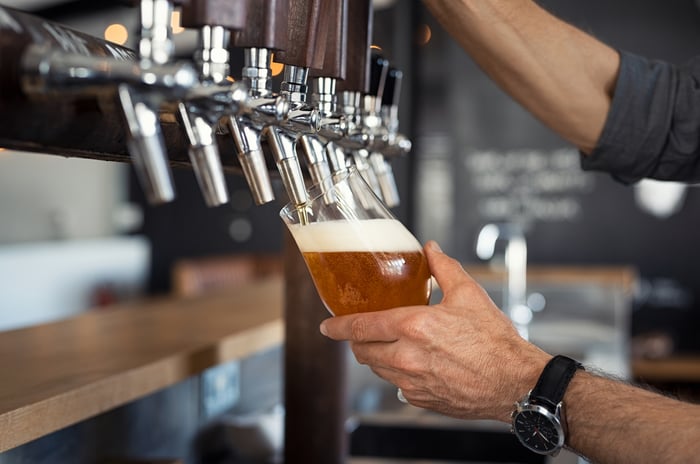 "First-quarter shipments growth was significantly higher than depletions as we took active steps to ensure that our distributor inventory levels are adequate to support drinker demand during the peak summer months," stated Boston Beer CEO Dave Burwick. "Our depletions growth in the first quarter was the result of increases in our Truly Hard Seltzer and Twisted Tea brands that were only partially offset by decreases in our Samuel Adams and Angry Orchard brands."

Boston Beer founder and Chairman Jim Koch cautioned that the company is still battling a "general softening of the craft beer category," as well as "retail shelves that offer an overwhelming number of options to drinkers."

We plan to continue to invest in the coming months to improve trends and remain focused on the longer-term goal of returning Samuel Adams to growth. While it's too early to draw long-term conclusions, we've received very positive reactions from distributors, retailers and drinkers on our new Sam Adams packaging design and the new taste profile of Sam Summer Ale. We are confident in our ability to innovate and build strong brands and help support our mission of long-term profitable growth.

Boston Beer reiterated its previous guidance for full-year 2019 adjusted earnings per share of between $8 and $9, though that range now assumes depletions and shipment growth of between 10% and 15%, up from between 8% and 13% previously, national price increases of between 1% and 3%, steady from its old guidance, and gross margin of between 50% and 52%, down from between 51% and 53% before.

With that zero-sum game resulting in the same bottom line, however, it's encouraging to see Boston Beer working hard to meet increased demand for its wares. Given the prospect of returning the Samuel Adams brand to growth in the coming quarters while sustaining momentum for its supplementary innovations, it's no surprise to see Boston Beer stock bubbling higher as we speak.