Realty Income (NYSE:O) is one of the leading retail REITs in the United States, specializing in freestanding, single-tenant retail properties. Until recently, however, the company's portfolio has been entirely composed of domestic properties.

Now, that has changed. Realty Income just acquired a dozen properties in the U.K. for 429 million British pounds (about $555 million in U.S. dollars). While this isn't a huge investment in the context of Realty Income, which has a market cap of more than $20 billion and well over 5,000 properties in its portfolio, there's a great deal of long-term significance to the deal that investors need to be aware of. 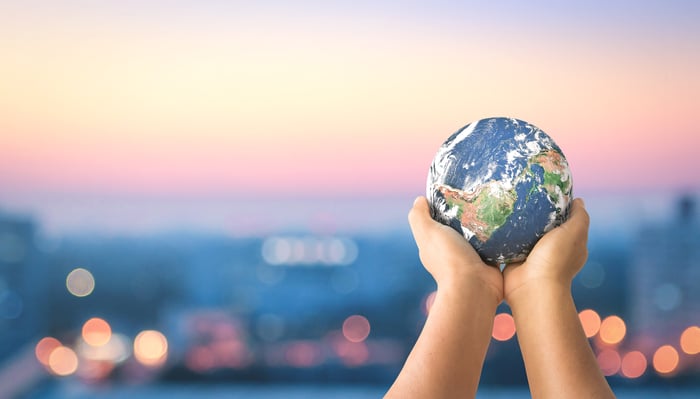 Realty Income has agreed to acquire 12 properties occupied by Sainsbury's, a leading grocery store operator in the U.K. and Ireland that has been around for 150 years and operates over 1,400 stores. As I mentioned, the transaction price was roughly $555 million in U.S. dollars.

This is a sale-leaseback transaction, meaning that the properties are currently owned by the business that occupies them (along with a partner), which will now become a rent-paying tenant of Realty Income. With all 12 properties occupied by a large, financially successful grocer, and all properties commencing 15-year triple-net leases with built-in rent growth over time, it's not hard to see why this type of transaction is desirable.

CEO Sumit Roy says that the transaction should immediately add to Realty Income's profitability. "We are pleased to execute this sale-leaseback transaction at investment spreads relative to our first-year weighted average cost of capital that exceed our historical average. As a result, we are increasing our 2019 AFFO per share guidance to $3.28-$3.33 from $3.25-$3.31," Roy said in a press release.

Why did Realty Income decide to buy properties in the U.K.?

Realty Income has had tremendous success in the U.S., with the company growing from the owner of a single Taco Bell building to the largest net-lease REIT in the market. However, there comes a point when growth opportunities in the current target market may become limited and branching out becomes a smart idea.

In a nutshell, expanding to Europe opens up a huge addressable market for Realty Income. Europe's commercial real estate market is actually larger than that of the U.S., and Realty Income estimates that there is $30 billion-$35 billion per year of single-tenant transaction volume in its target verticals in Europe. Even if Realty Income can capture a low single-digit percentage of that, this would still be a big growth driver going forward. And Realty Income feels there is lots of demand for sale-leaseback transactions like this one, which are the company's specialty.

In an investor presentation, Realty Income says that it intends to establish a London office, and to grow its European portfolio "over time as we have done in the U.S."

To be clear, I don't necessarily believe Realty Income is having problems finding domestic properties to acquire. Having said that, it's certainly easier to find new opportunities to grow in a brand-new market than one in which you already own thousands of properties and are the largest player in your specialization.

In short, Realty Income's international expansion will not only immediately add to its profitability, but it gives the company a massive addressable market to grow into in the coming years, and this should translate into stronger returns for shareholders than if the company had simply stuck to the U.S.