Please ensure Javascript is enabled for purposes of website accessibility
Log In Help Join The Motley Fool
Free Article Join Over 1 Million Premium Members And Get More In-Depth Stock Guidance and Research
By Daniel B. Kline - Updated Apr 25, 2019 at 10:06AM

For a number of reasons, an acquisition deal might make sense.

For competitors, Amazon (AMZN -0.03%) and Kohl's (KSS -2.45%) have an increasingly cozy relationship. This week, the brick-and-mortar discount chain announced it would expand the pilot program under which it accepts returns for the online retailer to all of its stores in the next few months. In addition, a growing number of Kohl's locations carry Amazon's Echo and Fire devices.

These are mutually beneficial deals. Kohl's gets the added store traffic from people dropping off Amazon returns and buying Echo Dots, while the e-commerce giant gets to solve a pain point for its customers.

Could this relationship just be the start for the two companies? Is it possible -- maybe even logical -- that the online powerhouse might buy the discount chain? 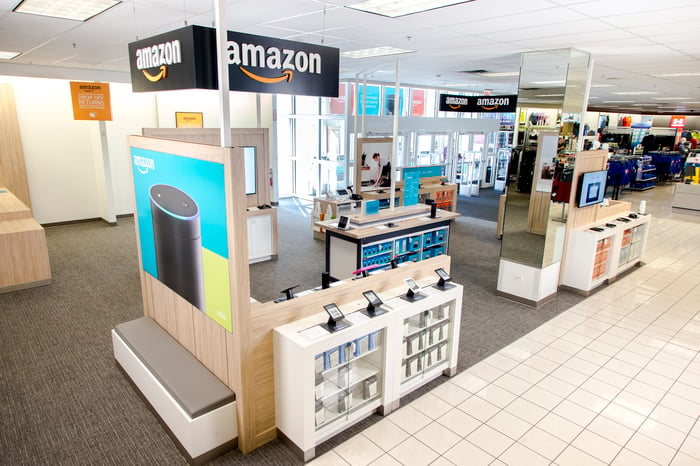 Amazon already has stores-within-a-store at some of Kohl's locations. Image source: Kohl's.

Why would Amazon buy Kohl's?

Brick-and-mortar retailers have certain advantages over their pure-digital counterparts. Their customers can handle products, browse more naturally, or go into a changing room and try on the clothes they're considering. And while Amazon benefits enormously from its lower-overhead e-commerce model, the fact that its customers can't do those things may be a big reason why the vast majority of its more than 400 exclusive private labels -- many of them apparel lines -- are selling so poorly.

Target (TGT -0.94%), by contrast, has had great success with private labels in clothing, household goods, furniture, and even cleaning products. Its decision to shift a large portion of its offerings into this arena gives it a couple of big advantages: First, being in a sense its own supplier gives the company more control over pricing, allowing it to offer high-quality goods for less. Second, consumers who like those brands have to keep patronizing Target to buy them.

That's a problem that a Kohl's acquisition could conceivably help with. Amazon would have a physical presence where it could show off its private label apparel and household items. That would aid greatly in discovery, and likely lead to sampling and then reordering on Amazon.com.

Think of it this way. Would you buy swimwear or yoga pants without handling them, or even trying them on? Buying Kohl's would give Amazon a way to  allow those things to happen, while also leaving it the ability to use its warehouse space for order fulfillment.

Amazon doesn't need to buy Kohl's in order to cut a deal to show off its private label goods in the chain's stores. The two companies could certainly deepen their partnership without fully joining forces.

Still, an acquisition could make sense, as Kohl's has over 1,100 stores that Amazon could leverage. And the retailer's already-popular private labels would make fine additions to Amazon's portfolio.

In addition, Kohl's has square-footage to spare. It has been cutting its stores' retail footprints, and in some locations, leasing out the extra space to Planet Fitness or grocery chain Aldi. It's not too much of a stretch to imagine some of that space eventually being occupied by small-footprint versions of  Amazon's soon-to-be-unveiled non-Whole Foods grocery stores.

The Amazon/Kohl's partnership appears to be working so far. Expanding it further -- whether with a full marriage or not -- should at least be something executives on both sides are considering.