Shares of World Wrestling Entertainment (WWE 0.20%) were getting pinned to the mat today after the Wrestlemania host posted weak results in its first-quarter report as revenue and profits both fell. As a result, the stock was down 12.1% as of 2:09 p.m. EDT.

The entertainment company said that revenue fell 2.8%, to $182.4 million, missing estimates at $199 million. Revenue from live events and merchandise sales fell, which the company blamed on temporary Superstar absences.

However, those declines were offset by growth in its media business, as WWE Network average paid subscribers rose 2% to 1.58 million, digital video views rose 15% to 7.7 million, and hours watched rose 23% to 300 million. Revenue from media, its biggest segment, ticked up 1.5% to $135.4 million. 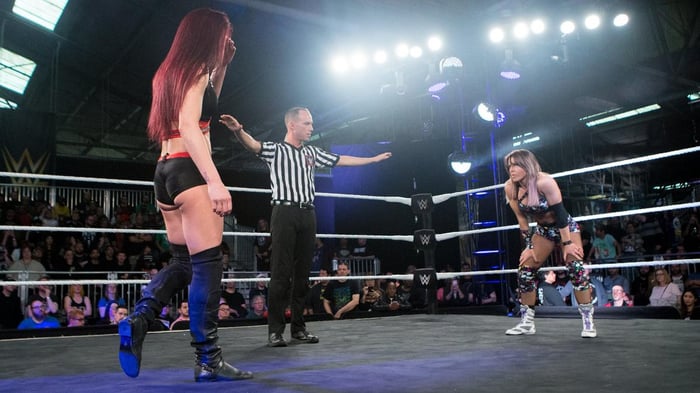 Increased investment in content weighed on the bottom line as the company reported an operating loss of $6.8 million, down from a $21.8 million operating profit the year before, and posted a loss per share of $0.11, compared to an $0.18 profit in the quarter a year ago. Analysts had expected a loss of $0.02 per share.

CEO Vince McMahon said: "While engagement metrics over the past two quarters were impacted by Superstar absences, we believe they will improve as our talent return and we launch our new season following a successful WrestleMania. We remain excited about the future, particularly with our debut on Fox in October."

WWE has faced some negative press lately about talent mismanagement, the gross pay gap between male and female stars, and its reluctance to develop newer talent. The HBO show Last Week with John Oliver recently did a segment spotlighting the company's poor treatment of its performers.

Nonetheless, WWE remains optimistic about the rest of the year, maintaining its forecast of $1 billion in revenue and at least $200 million in Adjusted OIBDA (Operating Income Before Depreciation and Amortization), representing a 12% increase from the year before.

Its deal with Fox later this year looks promising, as does the increase in viewership across multiple platforms, but investors should keep their eyes on the talent issue over the coming quarters as it may not be so easy to resolve.