The casual-dining chain delivered solid comps growth, but profits declined due to bad weather and other challenges.

BJ's Restaurants (BJRI 0.99%) shares have whipsawed over the past couple years. The stock climbed from less than $30 in September 2017 to more than $75 a year later as the company's turnaround initiatives, including delivery, a specialty slow-roasted menu, and service improvements like server tablets, delivered encouraging results.

However, since then, the stock has fallen by more than a third as early momentum from the turnaround seems to be fading, and investors realize that the stock had perhaps been overbought. Coming into BJ's first-quarter earnings report, investors were looking for some reassurance that performance was still moving in the right direction and that the company had the right mix of new and old initiatives to drive growth. 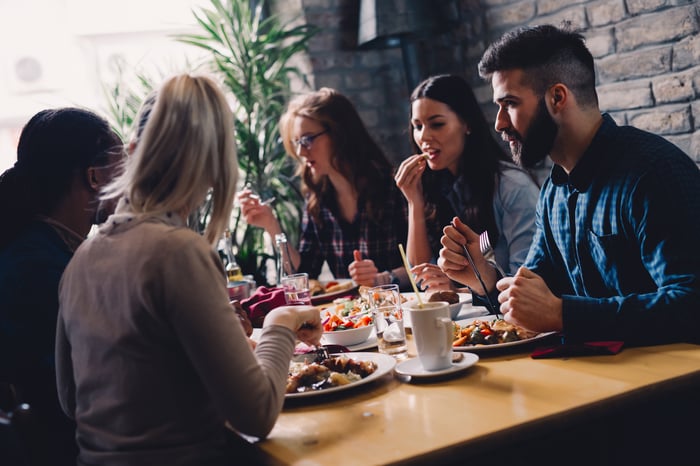 BJ's delivered another round of solid results in the quarter, even as the company dealt with operational headwinds. Let's take a closer look.

Comparable sales were positive once again, rising 2% after a 4.2% jump in the year-ago quarter. Guest traffic was up 0.7% in the period, representing its sixth consecutive quarter of positive traffic, and management said the company continued to outperform the casual dining benchmark.

In its fourth quarter earnings call in February, management warned of the impact from harsh winter weather across much of the country, which slowed sales growth, as well as the impact of rising labor costs due to increases in the minimum wage, which partly explains the decline in profits.

BJ's opened one new restaurant in the quarter, in Toledo, Ohio, and another after the quarter ended, in Sterling Heights, Michigan, bringing its grand total to 204. The company also repurchased $11.9 million worth of stock, but its share count still increased because of stock-based compensation.

CEO Greg Trojan once again touted the company's initiatives in new menu items and elsewhere in the business, saying:

Our new zucchini noodles and slow roast tri-tip sirloin are quickly becoming guest favorites and reasons to visit BJ's. In addition to our new menu items and other sales building initiatives, we are beginning to roll out our new Gold Standard Kitchen Systems to all of our restaurants in the second quarter. These new systems will focus on our kitchen organization, food prep and line cook speed to further enhance our already high quality positioning in the casual dining space.

BJ's has said in the past that it sees room in the market for 425 locations, more than double its current total.

BJ's doesn't offer specific guidance for the current quarter or the full year, so it's not clear if or when profit growth will return. However, on the earnings call, management alluded to the strong performance in the second quarter of 2018 when comparable sales rose 5.6%, and earnings per share nearly doubled. In other words, the company is up against difficult comparisons this quarter, making it harder to deliver profit and comparable-sales growth.

With the company's comps growth slowing, it seems that the low-hanging fruit in the turnaround may have been already picked as BJ's was able to recover sales that were lost in previous quarters. Still, BJ's growth plan remains on track, and considering expectations and the impact of the weather, this was a solid report.