Please ensure Javascript is enabled for purposes of website accessibility
Log In Help Join The Motley Fool
Free Article Join Over 1 Million Premium Members And Get More In-Depth Stock Guidance and Research
By Anders Bylund – Updated May 1, 2019 at 7:49AM

Amazon.com (AMZN 0.97%) reported first-quarter results Thursday evening. The company crushed its own profit projections, based on sales near the top end of the official guidance range. Let's have a closer look at Amazon's solid report.

Amazon's net sales rose 17% year over year, landing at $59.7 billion. This was achieved despite a currency exchange headwind of $1.1 billion on the top line -- roughly in line with the company's forecast. Back out the currency effects, and Amazon's revenue growth swells to 19%. Management's guidance range for this metric stretched from $56 billion to $60 billion and the actual result nearly matched the very top of this range.

Further down the income statement, Amazon's management set up a guidance range between $2.3 billion and $3.3 billion for operating income. As a matter of fact, operating profits more than doubled from $1.93 billion to $4.42 billion.

That's the end of Amazon's bare-bones guidance figures for this report, but investors do pay close attention to a few other metrics. 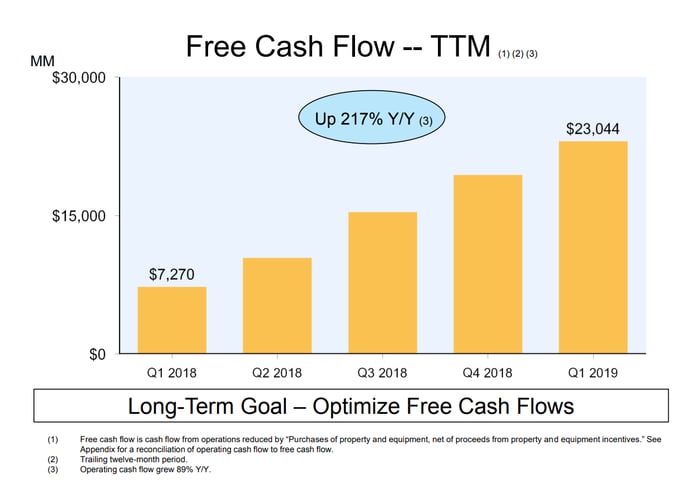 Breaking it down by business segment

International e-commerce revenue increased by 9%, stopping at $16.2 billion. This division tightened up its operating losses from $622 million to $90 million.

In other words, the bulk of Amazon's revenue growth came from the AWS division, but the North American e-commerce and Whole Foods operations pulled their weight in terms of profit increases.

For the second quarter, Amazon provided the following guidance ranges:

This growing fleet will put some pressure on Amazon's margins in the second quarter. Image source: Amazon.

On the earnings call, CFO Brian Olsavsky provided some commentary on why the second-quarter profit margins are trending lower. It's all about rising costs related to upgrades in the Amazon Prime shipping program:

We're currently working on evolving our Prime free two-day shipping program to be a free one-day shipping program. We're able to do this because we've spent 20-plus years expanding our fulfillment and logistics network, but this is still a big investment and a lot of work to do ahead of us. For Q2 guidance, we've included approximately $800 million of incremental spend related to this investment.

And just to clarify, we have been offering obviously faster than two-day shipping for Prime members for years. One-day, same-day, even down to one- to two-hour delivery for Prime Now. So we're going to continue to do to offer same-day and Prime Now selection on accelerated basis, but this is all about the core free two-day offer evolving into a free one-day offer. We've already started down this path.

The company has already started these improvements, expanding both the service area and the items eligible for one-day shipping during the first quarter. There's simply a lot more work left to do.

"It's a significant step and it will take us time to achieve and we want to ensure that we have a good delivery experience for our customers as we evolve the software," Olsavsky said.

Editor's note: The GAAP net income figure in this article has been corrected to $3.56 billion.