Please ensure Javascript is enabled for purposes of website accessibility
Log In Help Join The Motley Fool
Free Article Join Over 1 Million Premium Members And Get More In-Depth Stock Guidance and Research
By Rich Duprey – Apr 26, 2019 at 9:45AM

The pest-control leader had posted almost 13 years of quarterly revenue and earnings gains.

Pest-control expert Rollins (ROL -0.53%) missed analyst estimates for revenue and profits again in the first quarter, reporting revenue of $429.1 million and earnings of $0.14 per share. However, because the owner of brands such as Orkin and Western Pest Services doesn't provide guidance, these misses aren't such a big deal, as analysts are left to their own devices to come up with forecasts.

What's notable, though, is that for the first time in almost 13 years, Rollins failed to record a gain in both sales and profits. The pest-control company had posted 51 consecutive quarters of higher revenues and earnings before this quarter, but while sales were up 5% year over year, earnings of $44.2 million were almost 9% below the year-ago figure of $48.5 million.

Rollins blamed its difficult quarter on tough winter weather that kept termites in hiding, along with higher tax rates, currency headwinds, and enhanced employee benefits -- which cost the company about $1 million apiece. However, it also may be that its effort to consolidate the industry under its umbrella by buying up the competition is finally catching up to it. 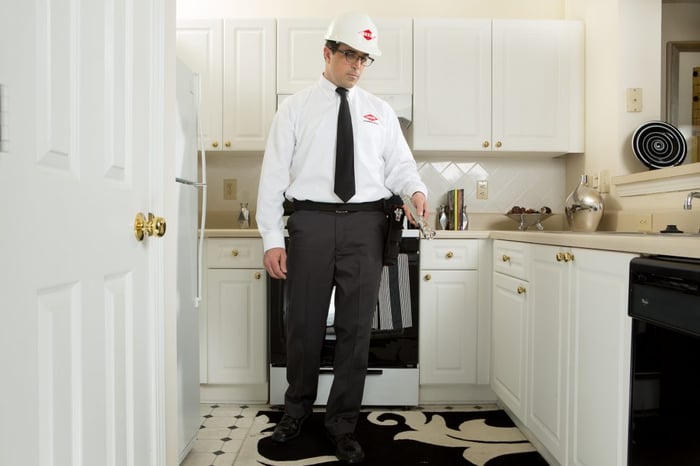 Rolling up the industry

Rollins states in its SEC filings that acquisitions are an "important element of our business strategy." Last quarter, Rollins bought three companies in the U.K., one in Singapore, and one from Kentucky, plus several small, tuck-in acquisitions, bringing to 38 the total number of purchases it made last year. It's now in the process of closing on yet another one, Clark Pest Control, that it announced in January and expects to complete in the second quarter.

Among the costs Rollins says have gnawed at earnings are the professional services it has had to employ related to those acquisitions, including higher IT costs, rising gasoline prices, and higher lease expenses. In addition, the risks associated with its spending spree have risen, as well.

That's likely mostly due to the small size of the businesses being acquired, but it heightens the risk profile of the company because of the problems inherent in integrating businesses into the fold. That risk also increases the more you add -- though because these companies are small, the probability of any one of them going sideways and impacting the bottom line too much seems small.

Rival Servicemaster (TMX) is also buying up businesses, but it's experiencing lower organic growth than Rollins. Growth by acquisition contributed 5 percentage points to the 7% gain it saw in sales in 2018. Similarly, U.K.-based Rentokil (RTOKY -0.46%) saw just 3.2% organic growth out of the 13.2% rise in revenue it recorded last year.

While Rollins' industry leadership means it trades at a premium, its valuation has soared, and its enterprise value currently trades at a tech-stock-like 38 times EBITDA. The stock, however, tumbled 7% in early trading on the earnings and revenue miss.

As Rollins grows its business internationally, it's going to experience more difficult comparisons if the U.S. dollar continues strengthening against foreign currencies. Over 90% of its business is U.S.-based, but the costs can mount over time.

Revenue growth has slowed sequentially now for three straight quarters and is down year over year, as well. The company is still among the best in the business, but it may be in a transition period as competition intensifies and its valuation remains elevated. Investors may be better served taking a pause on Rollins to see if the year-over-year earnings decline is a one-off event or the start of a new, worsening trend.

Why Rollins Stock Jumped 15% This Week

3 Stocks to Buy Ahead of the Next Market Crash
356%