Please ensure Javascript is enabled for purposes of website accessibility
Free Article Join Over 1 Million Premium Members And Get More In-Depth Stock Guidance and Research
By Lee Samaha - Apr 27, 2019 at 8:19AM

There are a lot of question marks around the future direction of the company following the departure of Ulrich Spiesshofer.

If you are the type of investor who values continuity and purpose in management, then you would run a mile away from ABB Ltd ( ABB 0.34% ). The recent, and abrupt, departure of Ulrich Spiesshofer has left the company searching for a permanent CEO while it embarks on major structural changes. That said, ABB does have a collection of businesses in attractive end markets, and the potential for improvement is significant -- value investors will be tempted. Will Spiesshofer's departure signal a rebound in the company's fortunes?

A little bit of ABB history

The answer will be delivered in the coming years, but the company's management certainly has a lot of heavy lifting to do, and there could be disappointments along the way. 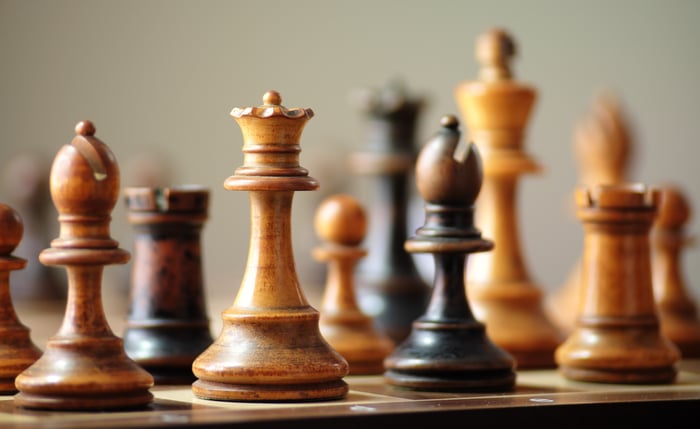 To understand the recent changes, you have to go back to 2016, when ABB was under pressure from activist hedge fund Cevian Capital to separate its poorly performing power grids segment from the company and focus on its other businesses, namely industrial automation, electrification products, and robotics and motion.

Partly in response to Cevian, Spiesshofer conducted a strategic review that concluded that power grids should stay in the portfolio and management would make a push toward digitizing its products. Later in 2017, ABB agreed to buy General Electric's ( GE -2.58% ) Industrial Solutions (GEIS) segment with the idea that added investment from ABB would lead to a pickup in GEIS margin and profitability.

A quick look at the stock's performance compared with its peers shows continued underperformance. Something had to be done to improve matters. 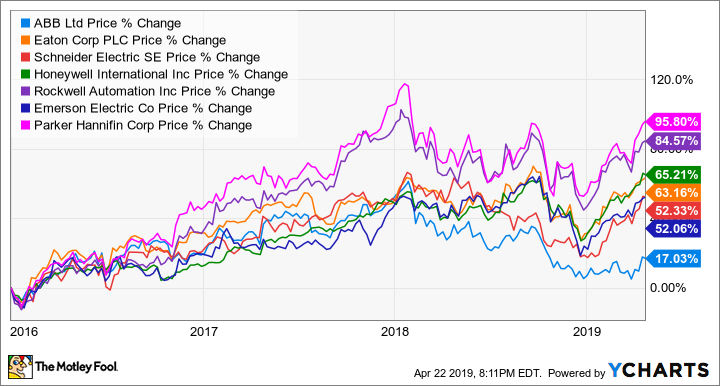 Fast-forward to the end of 2018, and ABB announced it would be selling power grids after all -- to Hitachi for a deal worth $11 billion. Spiesshofer's argument was that ABB had turned around the power grids segment and doubled its margins since 2014, and in doing so he had realized value for ABB shareholders by selling the business after improving it.

That's fair enough, but it's hard to argue that ABB has been making the most of its overall potential -- in a good year for the industrial economy ABB grew comparable revenue by just 4% in 2018, and margins continue to lag its peers.

Spiesshofer was encouraged to make more changes, and he moved to further embrace the digital age by forming a partnership between ABB and Dassault Systemes ( DASTY -1.52% ) in order to add "digital twin" solutions, and then announced that ABB would be ditching its matrix business model. For reference, a matrix structure is one whereby an individual or business unit reports to a number of different leaders. Spiesshofer argued that ABB would generate $500 million in efficiency gains as a consequence -- a significant figure, as income from operations was $2.27 billion in 2018.

It wasn't enough, or at least it wasn't enough to convince investors, and Spiesshofer's abrupt departure was welcomed by the market in mid-April. A positive knee-jerk reaction is fine, but what about the underlying investment proposition?

Unfortunately, there are more questions than answers right now. Some points of consideration stemming from the recent earnings call are as follows.

First, the GEIS acquisition has not quite gone as planned. CFO Timo Ihamuotila stated, "We all know that this business started with a little lower margin than we would have expected when it came in."

Second, regarding ditching the matrix model, interim CEO Peter Voser spoke about changing the business culture "which ABB had for the last, say, 15 or 20 years." This is not something likely to be achieved without some friction, and it calls into question the planned $500 million in efficiency gains.

Third, ABB is looking for a new leader, and a change at the top usually and hopefully means a change of direction. Therefore, it's still not exactly clear what ABB's direction is or whether a new CEO will adjust the significant restructuring plans currently in place.

Fourth, many investors will be holding ABB stock for its near 4.4% dividend yield, but it's far from clear if its dividend is sustainable without the power grids segment. For reference, ABB paid out $1.72 billion in dividend in 2018, but only generated adjusted free cash flow of $2 billion, with power grids contributing operating cash flow of $572 million. Will a new CEO cut the dividend in order to fund restructuring activity?

ABB is undoubtedly an intriguing value proposition, but as General Electric investors know, it often takes time before a true reset is in place. Cautious investors will want to wait until a new CEO is in place before feeling fully confident that the company is on track. In this context, ABB is probably a stock worth avoiding for now.

These Robotics Stocks Are Worth Buying and Holding