Background noise may color the view of the premium cooler maker.

Shares of cooler maker Yeti (YETI -1.37%) have surged 125% in 2019, a big turnaround from the 13% decline they experienced between the company's October IPO and the end of last year. They had lost as much as 25% of their value at one point, making them the biggest dog of the Class of 2018 IPOs. With the gains they've enjoyed this year, however, they are now among the most-shorted stocks on the NYSE.

Yeti is scheduled to report earnings on Thursday, May 2, before the market opens, so let's take a look at what this emerging lifestyle company faces and whether that portends more gains for its shares or if it's set to fall. 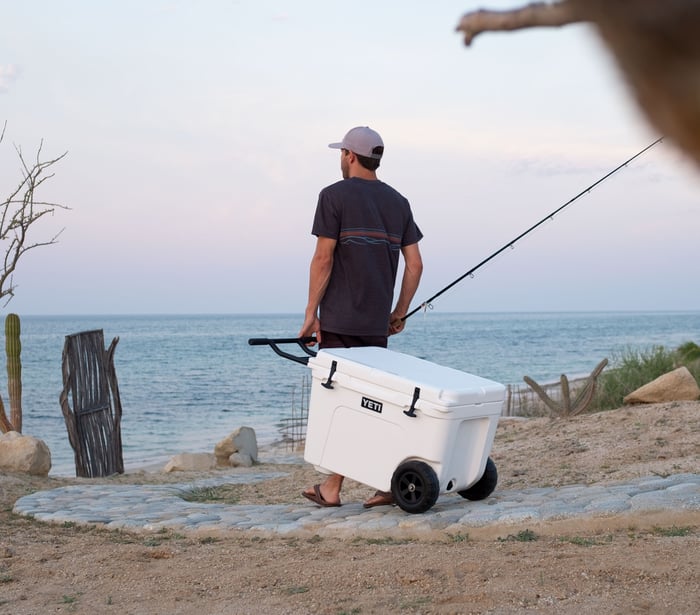 It may be known for its durable coolers, but Yeti actually sells more ancillary gear than it does big containers to keep your drinks and food from spoiling. Drinkware sales like mugs and tumblers accounted for two-thirds of total net sales last year and grew 37% to $424.2 million, whereas cooler sales inched 6% higher in 2018, hitting $331.2 million. (Shirts, hats, and other paraphernalia made up the rest.)

But Yeti will face an anomaly in the first quarter that will likely cause what looks like a big drop in sales.

The cooler maker sells a lot of gear direct to consumer, and that channel is one of Yeti's fastest-growing, up 45% in the fourth quarter last year. In addition to its own website, it also sells on Amazon.com's (AMZN -1.40%) Marketplace as a third-party seller. In accordance with that, there was an accounting change that went into effect in last year's second quarter that has Yeti recognizing revenue from Marketplace sales when the product is shipped to the customer instead of when it reaches the Amazon warehouse, as it used to.

While it still expects double-digit growth in 2019 from the channel, Yeti in the first quarter expects to take a 300-basis-point hit because of the change, and it will primarily come to the drinkware segment because Amazon sales tend to skew in that direction.

Yeti says the situation will reverse in the other direction in the second quarter with a 300-basis-point gain, but the first might look ugly since it is comparing sell-through to sell-in.

In addition to DTC sales, Yeti also sells wholesale at retailers like Dick's Sporting Goods (DKS -2.17%), REI, and Bass Pro Shops. It sells more coolers through its retail partners than it does DTC, and sales there, while growing, are much slower.

Wholesale net sales were up 4% in the fourth quarter and 10% for the year as its new Tundra Haul cooler -- Yeti's first cooler with wheels -- and its soft coolers were introduced. And that quarterly growth rate is about where Yeti expects to see growth continue. Where it anticipates DTC sales to continue in the mid-20% range, wholesale should grow in the mid-single-digit range.

Dick's Sporting Goods is certainly counting on Yeti to offset the decline it is experiencing from having banned the sale of certain guns at its store. It has coolers, drinkware, and other gear on display in all its stores, and chairman and CEO Ed Stack noted, "We're pretty pleased with where we are with Yeti.

With good retail partners, a solid online presence that is experiencing above-plan growth, and innovative product development, Yeti is certainly well positioned. But the accounting change it faces may make things look worse than they are, and investors should prepare to look through the noise at the underlying health of the business.