The plant-based-burger maker's valuation is growing quickly in advance of its public trading debut this week.

This year has been a remarkable one for private companies wanting to trade on public markets. Not only has there been a long list of candidates filing documents with the Securities and Exchange Commission (SEC) for their initial public offerings (IPOs), but a number have also seen their initial valuations jump in advance of their public launches.

Such is the case with Beyond Meat, one of the leaders in vegan-friendly substitutes for chicken, beef, and pork. In a new regulatory filing, the company not only raised the price range at which it will offer its stock, but also increased the number of shares it will sell to the public when it debuts this week.

Let's take a look at some of the details, and at what could be driving the price higher. 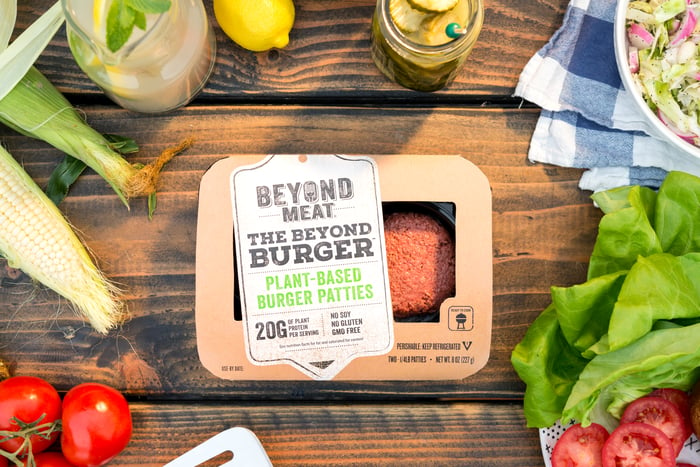 Beyond Meat originally planned to price its offering between $19 and $21 per share. In its updated S-1 with the SEC filed Tuesday, the company now says it expects its shares to fetch between $23 and $25 per share. Beyond Meat also increased the number of shares that will be offered to the public, to 9.625 million, up from 8.75 million in its previous filing.

If the shares eventually price at the top of this range, that would value Beyond Meat at as much as $1.49 billion, up from $1.21 billion in its prior filing, while raising as much as $241 million for its coffers.

The company also increased the number of shares it would make available to underwriters to 1.44 million, up from 1.31 million.

There are several things that could be driving Beyond Meat's growing valuation.

In the weeks leading up to a public debut, company executives and the investment banks that represent them embark on a process known as the "road show," a series of presentations to the investment community designed to drum up interest and assess demand for the company's shares.

Significant demand from institutional investors and heightened interest from individual shareholders during the road show can be key factors in increasing both the price range and number of shares, as the company wants to raise as much money as possible during its IPO to help fund its growing business.

The ability to significantly increase its revenue while holding its losses in check may provide investors with greater assurance that the company will achieve profitability sooner, making Beyond Meat a more desirable investment.

Meat substitutes are growing in popularity, and plant-based alternatives could steal market share from the meat industry itself. Meat sales topped $1.4 trillion worldwide and $270 billion in the U.S. last year. If Beyond Meat can attract just a portion of the dollars that are currently spent on meat products around the globe, the company will have a huge runway ahead.

Beyond Meat is also planning to follow the path that has been successfully laid out by the plant-based dairy industry, which markets its products as a healthier alternative to the original. This strategy has helped grow the alternative-milk-product market to about $2 billion, or about 13% of the overall dairy industry.

Beyond Meat will submit the final regulatory filings prior to its IPO and the company could go public as early as Wednesday, trading on the Nasdaq exchange using the ticker BYND. Investors should keep in mind that the stock of newly minted companies can be extremely volatile in the days and weeks after they debut, and buying shares at an IPO isn't for the faint of heart.

Case in point: shares of ride-sharing company Lyft (LYFT 2.90%) soared more than 20% from their offering price, but ended their first day of trading up just 8.7%. In the days following Lyft's March 29 debut, investors lost their early excitement, and shares fell as much as 28%, though they are currently down about 24%.