ConocoPhillips' (COP -0.71%) drilling machine continues to deliver strong results. The company overcame some headwinds during the first quarter to produce results near the top end of its guidance range. The oil company generated $1.1 billion of adjusted earnings for the period, or $1.00 per share, which came in well ahead of analysts' consensus expectations once again.

ConocoPhillips' production came in slightly above the midpoint of its guidance range, fueled by output growth from its big three shale plays (Bakken, Eagle Ford, and Permian) and major projects in Alaska, Europe, and the Asia Pacific region, as well as the net impact from acquisitions. Overall, output expanded by 5%, though it rose 13% on a debt-adjusted per-share basis after factoring in the positive effects of debt reduction and its share-repurchase program.

Production from the shale plays surged 30% year over year to an average of 326,000 barrels of oil equivalent per day (BOE/D) due to strong drilling results. Meanwhile, the company added a net 30,000 BOE/D via acquisitions, which included boosting its position in Alaska. Those items enabled the company to compensate for the impact of maintenance shutdowns in Qatar and a mandated production cut in Canada.

That higher output, when combined with improving oil prices, enabled ConocoPhillips to generate $2.94 billion in cash from operations during the quarter. The company spent $1.6 billion of that money to maintain and expand production, leaving it with $1.3 billion in free cash. It used most of those funds to pay roughly $300 million in dividends and repurchase about $800 million in stock. The remaining money boosted the cash position on its balance sheet up to $6.7 billion -- a number that should head significantly higher in the coming months since the company recently closed the sale of its Greater Sunrise Fields for $350 million and agreed to sell its remaining U.K. operations for $2.7 billion. 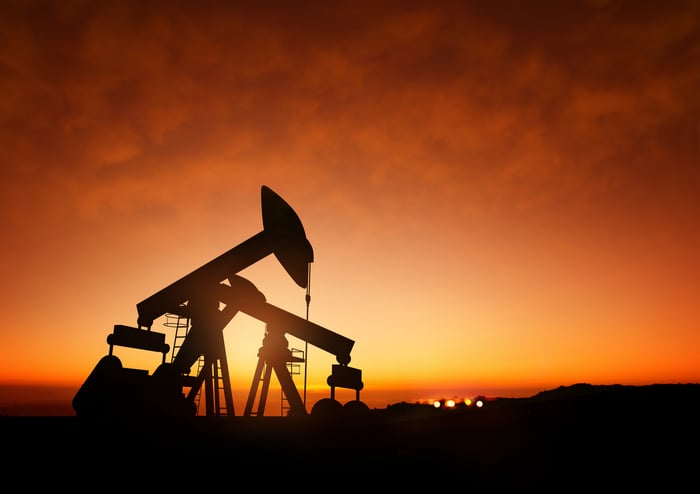 ConocoPhillips anticipates that its output will slip during Q2 to between 1.24 million and 1.28 million BOE/D due to planned maintenance activities in Alaska, Canada, and Europe. Production, however, should reaccelerate during the second half as the company ramps up its drilling activities in its big three shale plays. ConocoPhillips foresees its output from those regions growing 19% for the year.

The company initially expected full-year production between 1.3 million and 1.35 million BOE/D, which at the midpoint would have been up 5% overall and 8% on a debt-adjusted per-share basis. However, the sale of its U.K. assets will reduce output by about 70,000 BOE/D, though the company hasn't yet adjusted its full-year guidance to reflect that. Nor did the company make any changes to its $6.1 billion capital budget, though it had intended to invest $200 million in its U.K. assets this year.

ConocoPhillips also didn't make any changes to its share-repurchase program, with it still on track to buy back $3 billion in stock this year. However, with $6.7 billion in cash and more coming in the door via asset sales, as well as the additional free cash flow it's producing due to higher oil prices, it seems likely that the company could ramp up stock buybacks this year.

Another excellent quarter from the oil giant

ConocoPhillips continues to prove that it has the right strategy to navigate the volatile oil market. That's enabling it to generate more cash than it needs to grow the business, which is allowing it to reward shareholders through steady repurchases. That approach should help the oil giant to continue creating value for shareholders.

Proceed With Caution When Considering This Ultra-Popular Energy Stock
376%