Please ensure Javascript is enabled for purposes of website accessibility
Log In Help Join The Motley Fool
Free Article Join Over 1 Million Premium Members And Get More In-Depth Stock Guidance and Research
By Daniel B. Kline - May 1, 2019 at 5:32AM

Those Sunday brunch reservations may already be hard to come by. (Hint: Consider taking her out on Saturday.)

May 12 is less than a week and a half away, and if you don't have your brunch or dinner reservation made already, you may be running out of options. In 2018, Mother's Day was the highest restaurant spending day of the year, according to data gleaned from the accounts of 50 million Bank of America active credit and debit card users.

Mother's Day restaurant spending, which averaged $45, was 55% higher than the average day, according to the data. And in further proof that most of us see taking mom out to eat as the natural way to celebrate, the second-highest restaurant spending day was ... the day before Mother's Day. 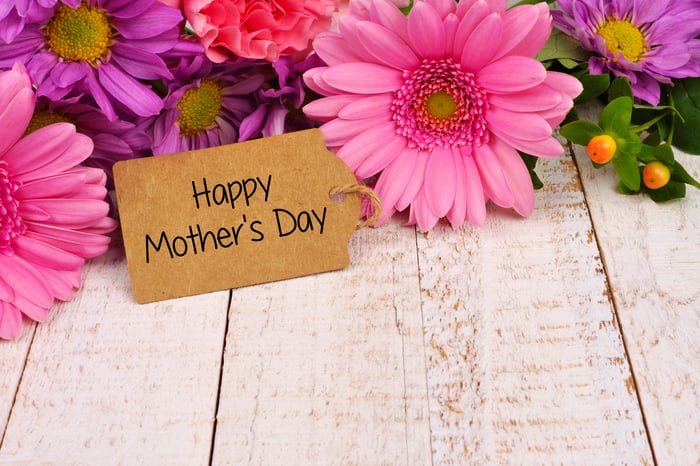 A huge day for spending

U.S. consumers are expected to spend a record $25 billion this year on Mother's Day -- and not just at restaurants -- an increase from $23.1 billion last year, according to data from the National Retail Federation (NRF). A fairly remarkable 84% of U.S. adults are expected to celebrate the day in some way.

"Mother's Day spending has been growing consistently over the past several years, and this year's spending is expected to be the highest in the 16-year history of our survey," NRF President and CEO Matthew Shay said. "Consumers are excited to celebrate all the moms in their lives, and retailers are ready to inspire consumers with unique gift options."

Health and beauty purchases are expected to be a top area for spending, according to Bank of America. In 2018, consumers spent an average of $82 on health and beauty spa gifts, a 3% increase over the previous year. That was actually below some other areas for what the average customer spent in other areas on Mother's day weekend:

That's not to say that every shopper spent that much in each of those categories. The data shows the average amount spent by each person who shopped at that type of store during the weekend.

Mother's Day is about making your mother -- and the other mothers in your life -- feel appreciated. Spending money is one way to do that, but it's important to be fiscally responsible while doing so. Mom probably doesn't want you to bust your budget or leave yourself unable to cover some of your bills in order to buy her a big gift or a fancy meal. And especially if she's the one who introduced you to the basics of personal finance, you can bet she wouldn't want you to carry those splurges as a credit card balance for very long, either.

So celebrate mom, but be reasonable about it. You can honor the mothers in your life with some time, attention and a home-cooked meal if that's what your budget allows. A provident approach may demand a little more cleverness and effort than simply buying a spa gift card and making a restaurant reservation, but choose what suits your situation, and mom should be pleased. After all, she only wants what's best for you.