Please ensure Javascript is enabled for purposes of website accessibility
Free Article Join Over 1 Million Premium Members And Get More In-Depth Stock Guidance and Research
By Dan Caplinger - May 1, 2019 at 4:26PM

The stock market sank on Wednesday, giving up early gains after the Federal Reserve left interest rates unchanged and signaled its willingness to wait on further rate increases while also remaining patient before considering moves in the opposite direction. Investors have increasingly watched for signs that monetary easing might be coming soon, with the Trump administration calling for massive rate cuts to stimulate economic growth. Even though major benchmarks finished lower, some stocks showed sharp gains. Royal Caribbean Cruises ( RCL -7.95% ), Enphase Energy ( ENPH -5.26% ), and Nu Skin Enterprises ( NUS -1.73% ) were among the top performers. Here's why they did so well.

Shares of Royal Caribbean Cruises finished higher by almost 7% after the cruise ship operator reported its first-quarter financial results. The company said that adjusted net income jumped more than 18% from year-ago levels, driven higher by strong demand and effective cost-control measures. Joint ventures between Royal Caribbean and key partners also performed well, and the cruise specialist said that it's seeing record bookings both in terms of volume and rates. Even with a recent shipyard incident weighing on the bottom line, Royal Caribbean boosted its full-year earnings outlook, and shareholders hope that its optimistic expectations for continued traveler demand prove to be correct. 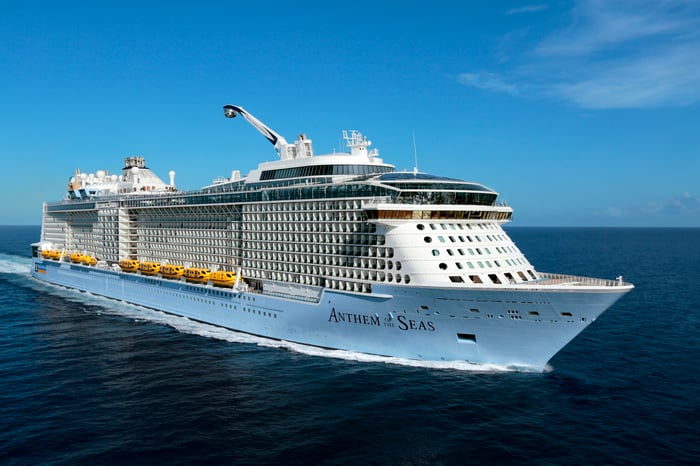 Enphase Energy saw its stock jump 29% after the maker of microinverters for solar power systems announced favorable results in its first-quarter financial report. Revenue soared 43% from year-earlier levels, as Enphase shipped more than 976,000 microinverters despite facing component shortages. The company pointed to its efforts to build partnerships with solar panel manufacturers and installers and work more closely with end users as having helped it build up its business, and Enphase offered encouraging guidance for the second quarter as well. Solar energy has seen its ups and downs, but Enphase is squarely in the driver's seat when it comes to profiting in the industry.

Finally, shares of Nu Skin Enterprises gained nearly 27%. The beauty and wellness product distributor said that revenue in the first quarter of 2019 rose 1% from year-ago levels, with foreign currency impacts costing the company 6 percentage points of growth. Yet earnings per share jumped 20% over the same period, and CEO Ritch Wood pointed to particularly strong expansion in China as having helped the overall business. Despite facing ongoing pressure from adverse currency moves, Nu Skin still projects it will see a solid recovery toward the second half of 2019 to produce full-year sales gains in the 3% to 5% range, and investors like the prospects for accelerating growth heading into 2020.