Please ensure Javascript is enabled for purposes of website accessibility
Log In Help Join The Motley Fool
Free Article Join Over 1 Million Premium Members And Get More In-Depth Stock Guidance and Research
By Asit Sharma – May 2, 2019 at 4:28PM

In a predictable pattern, the company exceeded its own forecasts, but its growth rate may be leveling off.

Chegg (CHGG 3.21%) once again provided its shareholders with breakneck growth and an upgraded forecast in its first-quarter 2019 results released April 29. Perhaps investors have become accustomed to a regular cadence of upward -- if sometimes slight -- earnings revisions. Though the company posted its ninth consecutive quarterly outlook tweak, shares have dipped roughly 10% in the trading sessions following the release to date. Stock in Chegg is still up roughly 25% year to date, though.

Note that in the discussion that follows, all comparative numbers are presented against the prior-year period, the fourth quarter of 2017. 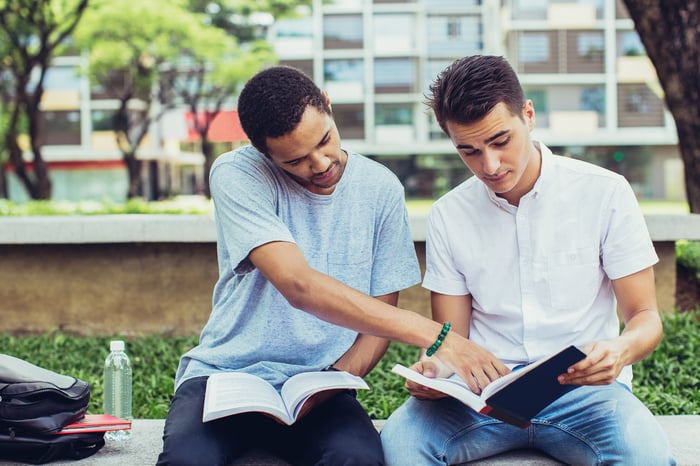 [W]e did the transaction ... because it was very favorable terms ... And we truly believe that there are going to be opportunities that we can take -- with our current capital structure, not just the cash, but the overall capital structure, [that] will allow us to do transactions that we just couldn't have done just even two or three years ago ... So it does open up bigger opportunities for us, but it doesn't change how we evaluate the opportunities. That's the most important thing. And one of the things that we've focused on ever since I got here, every transaction we've done, right, does it leverage some of our core assets, our brand, our reach, our platform, our data? -- You name it.

As Brown hints above, not only does Chegg hold a sufficient amount of cash for a large acquisition, it also can use its appreciated stock in one or several transactions. For shareholders who worry about the inevitable slowing of Chegg Services' growth, management is signaling that the company won't be hesitant to supplement revenue through strategic purchases of growing businesses.

Chegg bumped up its full-year 2019 guidance, albeit marginally, this quarter. The company now expects revenue to land between $393 million and $398 million, from an earlier range of $390 million to $395 million. Adjusted EBITDA is now anticipated in a band of $117 million to $120 million; previously, management had targeted adjusted earnings at between $115 million and $118 million.

Chegg outlined the following expectations for the second quarter of 2019:

While the company is still enjoying crisp revenue improvement, as I mentioned at the outset of this article, frequent if minor earnings revisions may be losing their wow factor with long-term shareholders. Given its huge cash position, investors shouldn't be surprised if Chegg chooses to bulk up its top and bottom lines later this year with a significant acquisition in the educational services market.