Please ensure Javascript is enabled for purposes of website accessibility
Log In Help Join The Motley Fool
Free Article Join Over 1 Million Premium Members And Get More In-Depth Stock Guidance and Research
By Demitri Kalogeropoulos - May 2, 2019 at 10:41AM

The hotel chain affirmed its 2019 outlook and still plans to sell over $1 billion of real estate in the next few years.

Investors have been gaining confidence in Hyatt Hotels (H 2.09%) lately as the chain benefits from healthy industry growth in key hospitality markets around the world. Financial returns are also rising as management shifts operating strategies toward collecting a higher proportion of franchise fees over owning and managing its own properties.

Hyatt's first-quarter 2019 results demonstrated how that approach can protect profitability even under modest growth conditions.

Hyatt's double-digit sales gain was powered by a quickly expanding base of hotels, along with rising revenue from existing locations. Earnings were supported by robust franchise and management fees, although reported profits dived due to the impact of a large group of asset sales in the prior-year period. 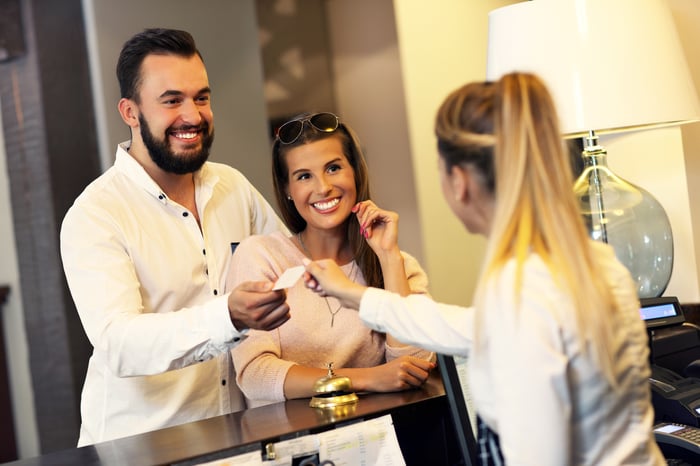 Executives expressed confidence that the business will keep growing thanks to the combination of higher franchise fees, an expanding hotel base, and solid occupancy rates at existing locations. "We had a strong start to the year," CEO Mark Hoplamazian said in a press release, "highlighted by continued growth of management and franchising fees."

Hoplamazian added, "We expect growth in both systemwide RevPAR and hotel rooms to sustain upward momentum in our lodging fees as we continue to evolve to an asset-lighter business model."

That business model evolution includes a planned $1.5 billion of asset sales over the next few years, but Hyatt didn't close any real estate deals under that initiative in the first quarter. While investors might see big capital moves here at any time, it's more useful to follow core growth metrics like RevPAR and hotel room levels to judge how the business is doing.

On that score, Hyatt affirmed all of its key 2019 outlook metrics and still expects core revenue to rise by between 1% and 3% versus 3.1% last year. The chain is also on pace to add 80 new hotels representing room growth of between 7% and 7.5%. Those expansions should combine with rising management fees to deliver adjusted earnings -- which help account for volatile real estate gains and losses -- to land between $780 million and $800 million, compared with $777 million in 2018.