Please ensure Javascript is enabled for purposes of website accessibility
Log In Help Join The Motley Fool
Free Article Join Over 1 Million Premium Members And Get More In-Depth Stock Guidance and Research
By Reuben Gregg Brewer - May 3, 2019 at 7:46PM

Nucor's first quarter wasn't as good as its fourth. Here's what management has to say about that and more.

In late April, Nucor (NUE 1.28%) reported first-quarter 2019 earnings of $1.63 per share, up from $1.10 in the first quarter of last year. Although at first blush that sounds like a great result, it was down sequentially from the fourth quarter, when the U.S. steel giant made $2.07 per share. Steel is a highly cyclical business, so the drop from the fourth quarter is worth understanding. Here are some of the key issues that Nucor's management team discussed during its first-quarter conference call.

The first thing to note with Nucor is that it had a good first quarter, as CEO John Ferriola explained in the company's press release: "Our diversified business model helped us to once again deliver a significant year-over-year improvement in first-quarter earnings." This fact shouldn't be overlooked because 2018 was a record year for Nucor. Even if full-year 2019 results aren't as high, it could still be a very good year. 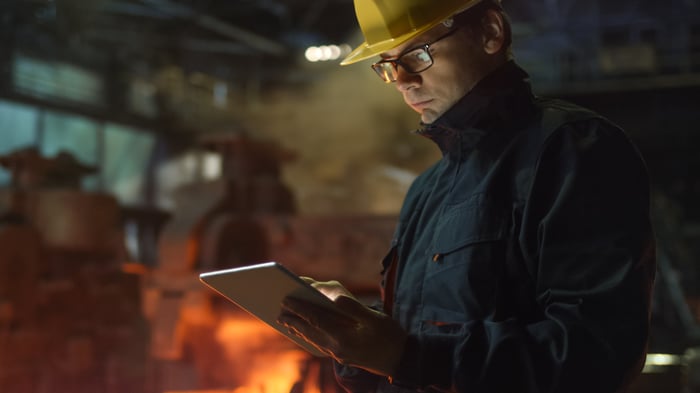 A couple of potential headwinds noted in the conference call, however, were pricing and volume. On pricing, Ferriola noted:

In other words, competitors opening up shuttered mills and restarting capital projects are undercutting on price so they can sell product. United States Steel (X 1.08%), for example, has announced three material restarts over the past year or so. This is not good news, but not horrible. Once the new supply is in the market, pricing will likely normalize. That will obviously also have an impact on volume, but there's another factor here:

Some of our customers last year, they got a little bit heavy in their inventories because of hedge buying, they thought they'd get ahead of the 232 [tariffs], they got some heavy loads there that is still working their way through.

That extra buying was a tailwind in 2018, helping to push results to record levels. However, bloated inventories are a headwind now. But, once again, as that extra inventory works off, the market will stabilize. All in, 2019 has started off strongly, even if the first quarter was lower sequentially -- which is a potentially troubling sign in a cyclical industry.

James Frias, the company's CFO, added some color to this statement:

Now turning to the outlook. We expect 2019 to be another robust earnings year for Nucor. We continue to be encouraged by the overall strength of our domestic end use markets. In fact, we see stable or improving demand in 21 of the 24 end use markets we monitor.

The interesting thing here is that when the company discussed fourth-quarter earnings, it highlighted improving or stable conditions in 23 of 24 markets. The one weak spot was power generation, which remains a concern. But, added to that this time around were automotive OEMs and auto suppliers, which are now expected to see declines. That's not a good sign, but the CFO noted, "We anticipate that the decline in automotive unit volumes will be moderate and that Nucor will actually grow its shipments to these customers in 2019." In other words, share gains are expected to offset the weakness on the auto side of things.

So, while it's hard to make predictions too far in advance for a cyclical business that's just had a record year, as Ferriola made sure to point out, it doesn't appear to management that there are any material black clouds arising at this time.

3. What about all that building?

Getting back to the restarting of idled mills and capital projects among competitors, Ferriola made a big-picture comment about capacity:

There's been a lot of commentary about capacity expansion plans announced by the U.S. steel industry. While we will not speak to the plans of other participants in our industry, Nucor's long-term strategy for profitable growth is both disciplined and sustainable. Sustainability is achieved by making strategic investments that position Nucor to deliver a superior value proposition in cost, quality, and service to our customers.

Nucor, in fact, is part of the problem. It announced around $1 billion in capital spending plans in 2018, and more than $1 billion so far in 2019. Six capital investment projects will start up in 2019 alone, representing roughly $1 billion in spending. But it's important to step back and look at the long term here. As Ferriola hinted, Nucor's investing in its business is a part of what has driven the company's long-term success. 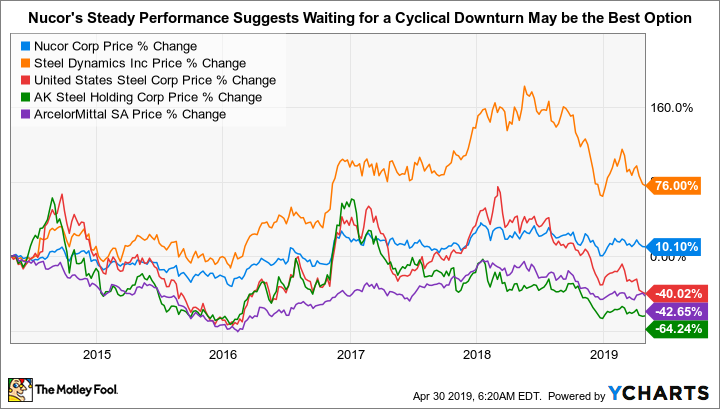 The important thing is to invest wisely, something Nucor has done well historically. Today, it is focused on entering new metal markets, expanding into underserved regions, and implementing industry-leading technology. Will all these efforts work out perfectly? Probably not. But they will help to set up Nucor for a better future, even if they create some near-term headwinds. In other words, Nucor isn't about to stop investing in its future because it still believes that it is the best way to grow long term. In fact, the steel giant even has a history of investing during industry downturns, so this is all just par for the course.

Still playing by the book

All in, Nucor's first-quarter results were strong, even though they hint that 2019 likely won't be as good a year as 2018. Indeed, there's nothing too concerning in the market that suggests 2019 will suddenly fall off the rails, though things can change quickly in this highly cyclical industry. And no matter what happens, Nucor will continue to invest in its business because that's how it grows over time. Shareholders should be pleased with the first-quarter showing and, for the most part, with the outlook. That said, unless you are looking to buy a steel stock today, most investors would probably be better off keeping Nucor on their wish list. The next cyclical downturn will probably lead to a more compelling entry point than exists today.