Please ensure Javascript is enabled for purposes of website accessibility
Log In Help Join The Motley Fool
Free Article Join Over 1 Million Premium Members And Get More In-Depth Stock Guidance and Research
By Keith Speights – May 5, 2019 at 9:15AM

Gilead's new CEO, Dan O'Day, gives several hints about where the big biotech is headed in his comments in the Q1 earnings conference call.

It's a new day at Gilead Sciences (GILD 1.02%). You might even say that it's a new O'Day. Former Roche Pharmaceuticals CEO Daniel O'Day joined Gilead in March as its new top executive.

O'Day led his first quarterly conference call at Gilead on Thursday evening after the biotech reported its 2019 first-quarter results. He was understandably reluctant to give a lot of details at this point on what changes might be in store. However, based on O'Day's comments in the company's Q1 conference call, here are five things you can expect for Gilead with its new CEO at the helm. 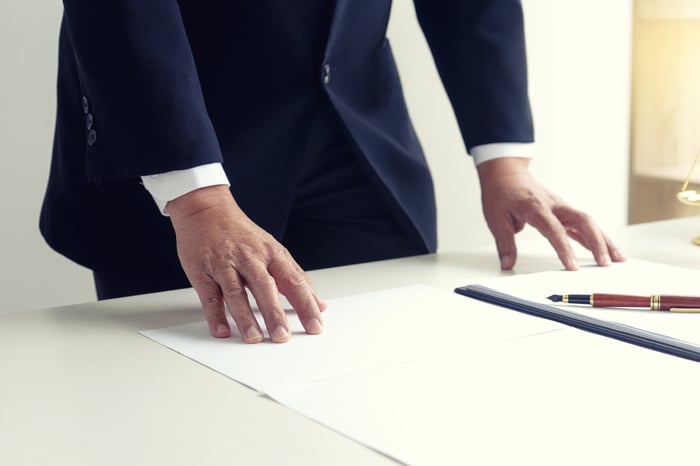 O'Day stated out of the gate that his top priority is to strengthen Gilead's pipeline. While that effort will include developing internal programs, it also means that the company is likely to pick up the tempo on licensing deals and acquisitions.

There weren't any hints, though, that Gilead would make a monster-sized acquisition. O'Day said that bolt-on acquisitions were most likely. He stated that the "vast majority of the opportunities are kind of in early stage or mid-stage." However, he also said that Gilead would look to strengthen its late-stage pipeline.

Gilead is only batting .600 on phase 3 readouts so far this year. While immunology drug filgotinib sailed through three late-stage studies with flying colors, selonsertib missed the mark in two late-stage studies targeting the treatment of non-alcoholic steatohepatitis (NASH).

O'Day specifically noted that he thinks combo treatments will be the way to go in NASH. He also said combo treatments would be important in immuno-oncology. It wouldn't be surprising for Gilead to make additional licensing deals and acquisitions in both areas in the near future.

2. An elevated position for Kite

With Dan O'Day's many years at oncology leader Roche, it only makes sense that he would see Gilead's Kite Pharma business as a key to the company's success. Sure enough, during his first month on the job, O'Day made the decision to establish Kite as a separate business unit within Gilead. A search is under way for a CEO for Kite who will report directly to O'Day.

This move to give Kite an elevated position seems like a smart one. Kite is without question a leader -- and based on sales so far, the leader -- in cell therapy. O'Day wants to make sure that Gilead wins in cell therapy over the long run. He thinks that giving Kite a higher degree of autonomy "will foster agility, innovation, and entrepreneurialism."

3. Some musical chairs in key roles

Several longtime Gilead executives left the company before O'Day came on board as CEO. It seems likely that there will be more musical chairs in key roles. O'Day listed his third immediate priority as "ensuring that we have the right people in the right roles and that they are well equipped for success."

Don't expect wholesale changes at the executive level, though. O'Day said that he's still reviewing the organizational structure, adding that "there will be an evolution and not a revolution."

Gilead already announced one key departure. CFO Robin Washington is retiring and will step down in March 2020. It didn't sound like Washington was pushed out, though. O'Day praised her work at Gilead and specifically noted that "it was a transition that I know she has contemplated for some time." He also stated that he had "hoped to have the opportunity to work with her for longer."

Gilead plans to submit for European approval of filgotinib in treating rheumatoid arthritis in the second half of this year. The biotech had hoped to also submit the drug for U.S. approval, but the FDA requested a safety study in adult males with ulcerative colitis because of concerns about testicular toxicity.

However, it sounds like Gilead is going to push harder for filgotinib. The company has requested a meeting with the FDA now that it has data from all three phase 3 Finch studies. O'Day mentioned that he had been working with Gilead's leadership team on how the biotech could "accelerate some of the plans around filgotinib."

It sounds like his conversations have made a difference. Robin Washington said, "We do believe there may be opportunities to enhance launch readiness for filgotinib that we are monitoring." Gilead Chief Scientific Officer John McHutchison stated that "there is some degree of urgency to get this drug approved as quickly as we can." That level of urgency didn't seem to be as great before O'Day joined the company.

But when asked whether or not the company would grow its top line into the 2020s, O'Day deflected the question, saying that it was "premature" to discuss sales growth for 2020 or beyond. While investors probably don't like hearing this hesitation, Dan O'Day is right -- the company's growth picture remains uncertain for now.

Gilead's growth is coming primarily from its HIV franchise, led by powerhouse drug Biktarvy. But the company faces generic competition in Europe for Truvada. And as successful as Biktarvy is, a significant percentage of its sales are coming from cannibalizing sales for Gilead's other HIV drugs, including its other Descovy-based products

As for Gilead's hepatitis C virus (HCV) franchise, the best the company can hope for is stabilization. Although HCV sales increased sequentially in Q1, there were some one-time factors that provided a temporary boost.

Yescarta is picking up momentum, but not enough to move the needle a lot at this point. Meanwhile, Ranexa already faces generic competition, and Letairis generics will be on the market soon.

All of this highlights the need for Gilead to have a stronger pipeline to generate growth. And that leads us back to Dan O'Day's top priority of strengthening the pipeline. Although he'll likely lead Gilead to make some moves relatively quickly, investors will probably have to wait a while for the biotech to return to the kind of growth levels they'd prefer.