Please ensure Javascript is enabled for purposes of website accessibility
Log In Help Join The Motley Fool
Free Article Join Over 1 Million Premium Members And Get More In-Depth Stock Guidance and Research
By Dan Caplinger – May 6, 2019 at 12:02PM

Warren Buffett's company has turned some of its early investors into billionaires.

The history of superstar investor Warren Buffett dates back more than half a century, as he took his initial steps into textile manufacturer Berkshire Hathaway (BRK.A -0.83%) (BRK.B -0.40%) in the early 1960s. Over the weekend, Berkshire held its annual shareholder meeting, which has turned into a global event that attracts tens of thousands of investors to Omaha, where Buffett has the company's headquarters.

Earlier this year, Berkshire reported that between 1964 and 2018, the company managed to produce average annual gains of 20.5%. That sounds impressive, especially when you compare it to the roughly 10% historical annual return of the broader U.S. stock market.

But it's hard to appreciate just what an annual return in excess of 20% really means for investors who bought Berkshire Hathaway stock and held it for the long run. To fully understand the scale of Buffett's success, it helps to look at a chart of its Class A share price over time. 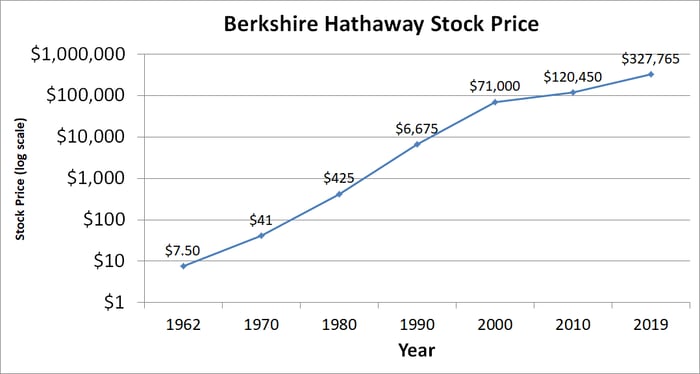 The impact of Buffett's prowess in making lucrative investments on Berkshire's behalf shows up especially clearly here for a couple of reasons. First, Berkshire has never paid dividends, and so all the appreciation in the company's intrinsic value has stayed with the company and boosted its share price. Second, although Berkshire did issue a second class of stock and subsequently did a stock split for that class only, the insurance giant's initial Class A shares have never undergone a split.

Some naysayers argue that Berkshire and Buffett have lost their market-beating touch more recently and that the company's best years are behind it. Even Buffett himself tacitly admits this, recognizing that Berkshire hasn't even managed to keep up with the S&P 500 over the past decade, let alone double its returns.

Yet the broader message for investors is that Berkshire is not the only stock that can produce impressive gains over long periods of time. Successful companies often reward their longtime shareholders with immense profits. The people who work hard to deliver those returns might not get the same recognition that Buffett has over his long career, but for shareholders who are diligent enough to search out such companies and stick with them, Berkshire-like returns could await for those who hold onto shares for the next half-century.