Please ensure Javascript is enabled for purposes of website accessibility
Log In Help Join The Motley Fool
Free Article Join Over 1 Million Premium Members And Get More In-Depth Stock Guidance and Research
By Danny Vena - May 6, 2019 at 3:09PM

The Disney-owned sensation is now the second-highest-grossing film in history -- after only 11 days in theaters.

The cinematic juggernaut that is Avengers: Endgame broke almost every conceivable box office record it could in its first week in theaters. Not only did the Disney (DIS -4.00%) megablockbuster secure the top spot for a domestic opening weekend take with $350 million, but it easily surpassed every worldwide debut in theatrical history, generating a mind-boggling $1.2 billion in global ticket sales.

Earth's mightiest heroes were still conquering records in the movie's second weekend in theaters. Disney announced Monday morning that the superhero team-up barreled past $620 million in North American sales and $2.19 billion in worldwide sales by Sunday. The Marvel moneymaker set another record by topping $2 billion in ticket sales faster than any other film to be shown in theaters. And it isn't nearly finished with its run. 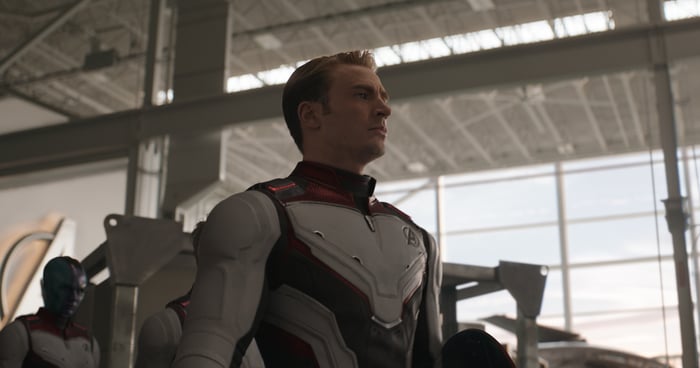 Chris Evans as Captain America and Karen Gillan as Nebula in a scene from Avengers: Endgame. Image source: Disney.

By Friday, Endgame had amassed $515 million in North American box office and $1.9 billion in worldwide ticket sales to become the fifth-highest grossing film of all time, having made quick work of Furious 7, the original Avengers, and Jurassic World. By Sunday, it had surpassed of Avengers: Infinity War, Star Wars: The Force Awakens, and Titanic to reach the No. 2 spot. That leaves only the James Cameron classic Avatar left to conquer.

In China, Avengers: Endgame crossed 3.88 billion yuan (about $576 million) in sales, making it the single most successful non-local film ever shown in the most populous country. It easily overtook The Fate of the Furious (the previous record holder). The movie also became the highest-grossing Hollywood release in India and the biggest box office draw ever in a host of other countries.

Making its accomplishment even more remarkable, the film has only been in theaters for about 11 days, so other records will continue to fall.

A decade of storytelling

The story arc that led to the events in Avengers: Endgame began more than a decade ago, with the release of Iron Man in 2008, followed by Hulk, Captain America, Thor, and others. It's the culmination of the franchise to date, which now includes 22 movies that have assembled nearly $22 billion in global ticket sales, making it easily the most successful franchise in film history.

Though the movies have introduced us to dozens of individual comic book characters, it's the stories that bring these heroes together as a team to face a global threat that have been the most lucrative. Avengers: Endgame, Avengers: Infinity War, Marvel's The Avengers, and Avengers: Age of Ultron have collectively accounted for more than $7 billion in box office sales. Infinity War and Endgame, which together focused on the tale of the titan Thanos, are two of only five movies to ever top $2 billion in box office receipts (the other three are Avatar, Titanic, and Star Wars: The Force Awakens). 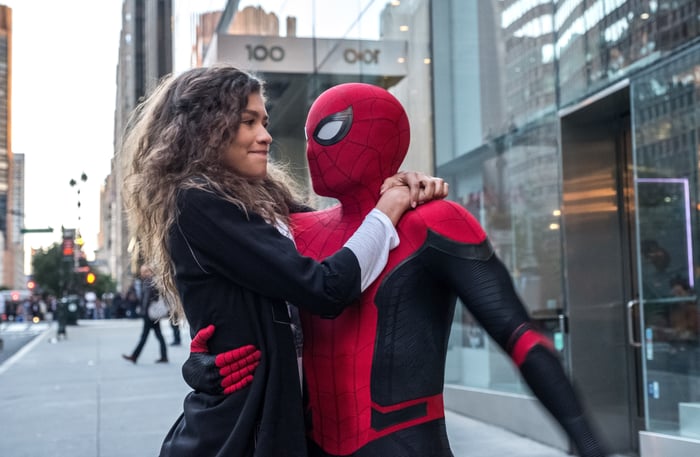 Tom Holland stars as Spider-Man and Zendaya as Michelle Jones in a scene from Sony's Spider-Man: Far From Home. Image source: Sony Pictures.

Movie industry insiders had previously projected that profits from Avengers: Endgame would add between $600 million and $650 million to Disney's bottom line. That estimate doesn't include ancillary profits from product licensing, and the additional fans that sign up for the new Disney+ streaming service or visit the company's theme parks. The final profitability will likely be even higher, depending on the final box office tally.

Even as the most recent installment brings the bigger story arc to a conclusion, that's not the end of Marvel's superhero aspirations. Sony's Spider-Man: Far From Home, as well as Marvel's Black Panther 2, Doctor Strange 2, and Guardians of the Galaxy Vol. 3, will all be coming to a theater near you in the coming months and years.