Please ensure Javascript is enabled for purposes of website accessibility
Log In Help Join The Motley Fool
Free Article Join Over 1 Million Premium Members And Get More In-Depth Stock Guidance and Research
By Jeremy Bowman – May 6, 2019 at 1:41PM

Shares of the airline climbed after the company announced a new route to London and reported a better-than-expected profit in its first quarter.

Shares of JetBlue Airways (JBLU -4.05%) were gaining altitude last month after the domestic airline turned in a better-than-expected first-quarter earnings report. Though profits actually fell in the period, the results were still strong enough to top Wall Street expectations, and shares finished the month up 13% according to data from S&P Global Market Intelligence.

The chart below shows that JetBlue's gains came at two separate points in the month, first after it announced a new route to London coming in 2021, and then later in the month when it turned in quarterly earnings. 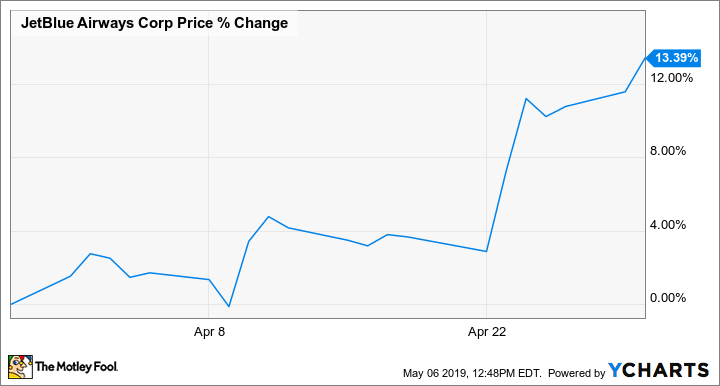 Jet Blue shares edged up 3.5% on April 10 after the company said it would begin making multiple daily direct flights to London in 2021 from New York/JFK and Boston, marking its first destination in Europe, a milestone for the company, and opening the door to further expansion on the continent. Management said it was still deciding which airport in London it would use, and said the move came as a response to customer demand. 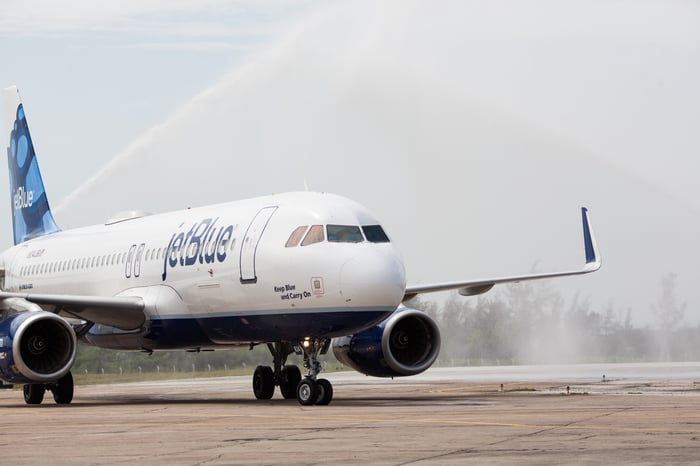 Then, on April 23, the stock gained 4.2% and rose another 3.6% the day after JetBlue turned in a better-than-expected earnings report. Revenue per available seat mile (RASM) in Q1 fell 3.1% year over year due to a shift in Easter and Passover to the second quarter; cost per available seat mile (CASM) excluding fuel ticked up 0.9%, better than JetBlue's guidance for an increase of 1.5% to 3.5%.

In its outlook, management forecast year-over-year RASM to increase 1% to 4% in the second quarter with a 2.25% tailwind from the shift of Easter and Passover. CASM excluding fuel was expected to rise 1.5% to 3.5% in the period.

If the company can execute on its 2020 guidance of $2.50 to $3 in EPS, representing a significant acceleration from a year ago, the stock looks like a bargain today at a P/E of just around 7. Meanwhile, the new London routes and further expansion to Europe give the company an outlet to further growth.