Please ensure Javascript is enabled for purposes of website accessibility
Log In Help Join The Motley Fool
Free Article Join Over 1 Million Premium Members And Get More In-Depth Stock Guidance and Research
By Lee Samaha – May 7, 2019 at 7:15AM

Here's a look at some of the key points in the company's earnings report.

For industrial supply company WESCO International (WCC 0.62%), the first quarter had some superficially weak-looking aspects to it. But behind the headline numbers, there's more positive news. Let's look at an earnings report full of nuance that needs some closer inspection.

In case you are wondering the difference between organic and reported sales growth is down to a reduction in the number of workdays and foreign currency which had a negative impact of 1.6% and 1.3% respectively, while an acquisition positively impacted reported sales by 0.3%.

As you can see, sales and margin performance came in toward the low end of guidance. This is superficially disappointing, but it's worth noting that results were somewhat hurt by cold weather. 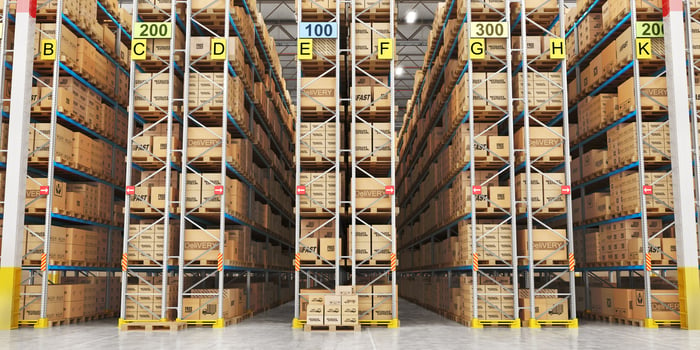 WESCO is a supplier of supply chain solutions in a range of industries. Image source: Getty Images.

Discussing the matter on the earnings call, CFO Dave Schulz said, "We experienced a significant number of branch closures and shipment delays due to winter weather events that impacted our customers' operations." As such, sales were weaker than management expected in January and February but were stronger in March, and "that's extended into April," according to CEO John Engel.

Turning to the issue of margins, Schulz noted that it was the third consecutive quarter that WESCO had improved gross margins. It's a sign that the company is gaining traction in passing on supplier price increases -- a previous problem area for WESCO.

Regarding the disappointing operating-margin performance, Schulz said that excluding the impact of an acquisition, WESCO's sales, general, and administrative expenses would have increased by only 1% versus the 2% reported. By my calculations, this means operating margin would have come in closer to 3.7% if you exclude the acquisition impact -- a figure toward the high end of the guidance range.

So the headline numbers were hurt by weather and acquisition impacts, which made them look worse than what the underlying progress suggests.

Another factor to consider is that WESCO came up against a difficult comparison from last year, and the same scenario holds for the second quarter. The chart below shows how organic sales growth was 10.9% in the first quarter of 2018 and 9% in the second quarter.

As such, management's guidance for 3% to 6% growth for the second quarter of 2019 could be taken positively. Moreover, the full-year guidance for organic sales growth ranging from 3% to 6% and operating margin of 4.3% to 4.7% was left as is -- as previously discussed, management is expecting year-over-year growth to improve in the second half of 2019. 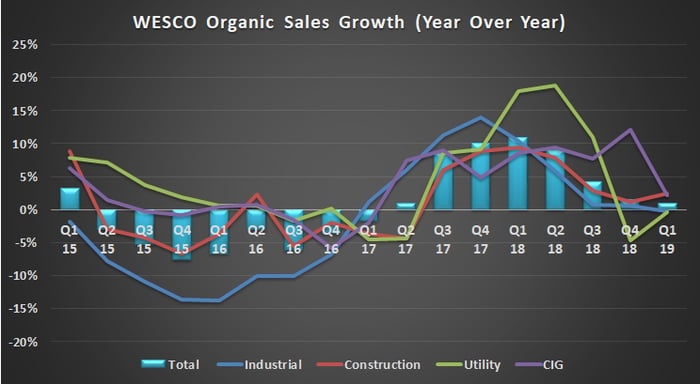 Digging into the end-market detail, Schulz said the construction end-market momentum improved in March in North America after a slow start in January and February -- consistent with the weather effects discussed above. The industrial end market is expected to grow in line with expectations, albeit lower than last year, for industrial production. And WESCO expects another "strong year" for utility sales.

All told, the underlying results were somewhat better than the headline numbers suggest -- and definitely better than the market was pricing when industrial stocks were aggressively sold off in the last quarter of 2018. There are definitely some parts of the industrial economy that are slowing in 2019, and some like automotive, which are turning negative. But WESCO's results and outlook suggest there are enough pockets of growth to enable many companies to reach satisfactory outcomes this year.

Investors will be hoping WESCO can deliver on its guidance, and in particular leverage sales growth into earnings growth through margin expansion.