Please ensure Javascript is enabled for purposes of website accessibility
Log In Help Join The Motley Fool
Free Article Join Over 1 Million Premium Members And Get More In-Depth Stock Guidance and Research
By George Budwell - Updated May 7, 2019 at 9:15AM

Heron's falling share price last month turned out to be a bad omen.

Heron Therapeutics (HRTX 2.59%), a commercial-stage biotech, saw its shares fall by 11.7% over the course of April, according to data from S&P Global Market Intelligence. This double-digit drop is noteworthy because it occurred ahead of the company's official announcement that the Food and Drug Administration (FDA) had issued a Complete Response Letter for the experimental pain medication HTX-011.

According to an 8-K filing with the SEC, the FDA sent Heron its decision regarding HTX-011 on April 30. But the company didn't dole out the bad news to investors until the following day, May 1. The market clearly sniffed out this forthcoming rejection -- even though it came as a surprise to most analysts and industry insiders. 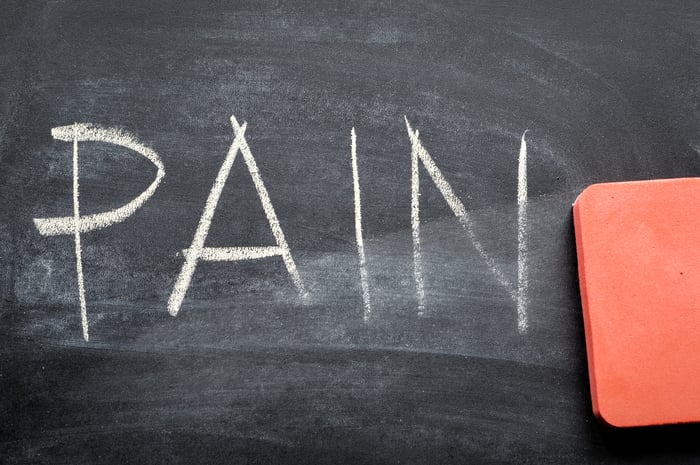 Heron is banking on HTX-011 to transform the company into a super-charged growth vehicle in the next decade. The company's first two FDA-approved products -- Sustol and Cinvanti indicated for the management of chemotherapy-induced vomiting and nausea -- simply aren't big earners, after all. HTX-011, by contrast, has a chance at hauling in several hundred million in sales at its peak -- even as a direct competitor to Pacira BioSciences rival pain reliever Exparel.

In a follow-up conference call, Heron's management stressed that the FDA didn't request any additional clinical studies. Rather, the primary reason for the rejection was missing info on the drug's chemistry, manufacturing and controls -- an issue that pops up fairly often during regulatory reviews.

As such, Heron should be able to make the necessary corrections and get this regulatory filing back to the FDA in a timely fashion. The bad news is that HTX-011 now seems destined to launch next year at the earliest. That's not the end of the world, but Heron's share price will probably stagnate until this regulatory risk factor is off the table.