Shares of TripAdvisor (NASDAQ:TRIP) were heading south after the travel-recommendation engine again hit a speed bump in revenue growth in its latest quarterly report. Shares were down 12.7% as of 12:14 p.m. EDT.

TripAdvisor said that revenue in the first quarter fell 1% to $376 million because its core hotel segment was flat, missing analyst expectations at $387.2 million. 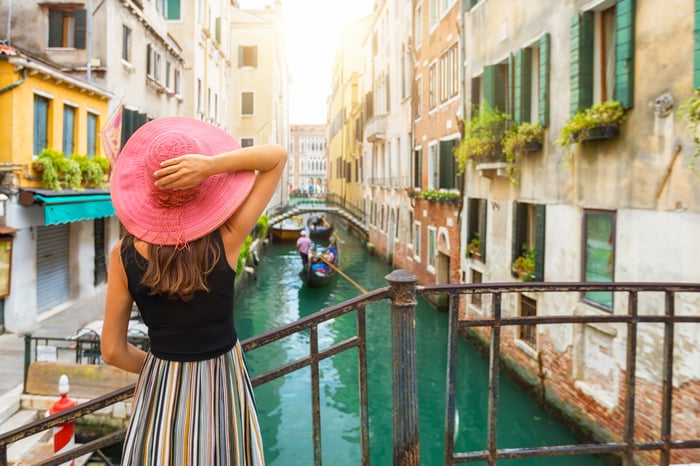 The company continued to see growth in its experiences and dining segment, which rose 29% to $80 million. However, "other" revenue fell 33% to $42 million, though management explained that that was due to the elimination of marginal and unprofitable revenue from non-Trip Advisor-branded offerings, which increased profitability even as it reduced revenue.

That decision as well as a cut in hotel marketing spending helped drive growth on the bottom line as adjusted EBITDA increased from 11% to $89 million and adjusted net income rose 21% to $51 million. On a per-share basis, adjusted profit rose from $0.30 to $0.36, beating estimates at $0.31.

CEO Steve Kaufer said: "In Q1, we grew profit and while investing in and growing our strategically important Experiences and Restaurants businesses. This year we are focused on product improvements and supply growth to drive an even more engaged customer base and long-term revenue on our platform."

Looking ahead, management said it continues to expect double-digit adjusted EBITDA growth, with strong double-digit EBITDA growth in hotels and positive EBITDA in experiences and dining. It also said revenue growth would pick up in the second half of the year because a stronger dollar sapped growth by a few percentage points in the first quarter.

Given that results were similar to both management's and analysts' expectations, today's sell-off is surprising. After a solid quarter and consistent guidance, there's no reason to change your investing thesis based on today's news alone.