After a steep drop in March, shares of Greenbrier Companies (NYSE:GBX) recovered sharply to gain 10.2% last month, according to data provided by S&P Global Market Intelligence. Greenbrier announced its second-quarter numbers in April but surprisingly lowered its full-year earnings guidance. Why did the stock then jump? Two reasons stand out, including an acquisition.

Greenbrier already gave investors a glimpse into its second-quarter performance in March when it announced preliminary numbers. But the company left investors guessing about its full-year outlook, even spooking them by saying it was "reviewing its previous annual financial guidance" after a weak dismal second quarter. Not surprisingly, the market saw these words as a precursor to a sharp upcoming cut in Greenbrier's earnings guidance, which then stood at $4.20-$4.40 per share, already representing a decline from its fiscal 2018 earnings per share of $4.68. 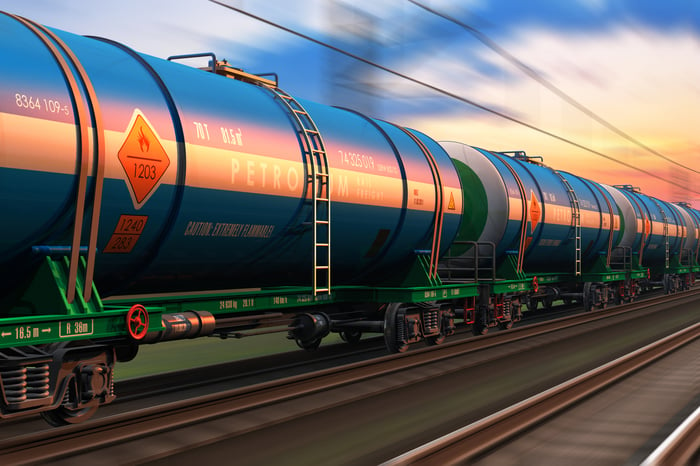 As expected, on April 5, the railcar and transportation equipment manufacturer reported 4.7% growth in revenue but 96% drop in net income for Q2, thanks to "loss accruals" on some contracts and costs related to the closure of a repairs facility. Greenbrier also downgraded its EPS outlook pretty dramatically to $3.60-$3.80, but turns out the market expected much worse. The result? Greenbrier shares rallied.

A bigger move in the stock came after April 18, though, when Greenbrier announced it'll buy the manufacturing arm of American Railcar Industries (ARI) for a gross purchase value of $430 million from ITE Management, a hedge fund that acquired ARI from billionaire activist investor Carl Icahn last year. The deal was in the making for several years and makes perfect sense given that it combines the second- and third-largest railcar manufacturers in North America. ARI specializes in hopper and tanker railcars.

I recently highlighted how Greenbrier needs a stronger order flow to grow revenues further. Its impending move to acquire ARI manufacturing is, therefore, a step in the right direction as it should diversify the company's portfolio in terms of products and geography.

While Greenbrier hasn't provided a revenue guidance post-acquisition, ARI's last available annual report reveals its manufacturing business generated roughly $264.6 million in revenue in fiscal 2017. Greenbrier expects the acquisition to add 20% to its adjusted EPS and be free-cash-flow accretive in the first year. Combine that with Greenbrier's 2019 forecast revenue of $3 billion, compared with $2.5 billion in 2018 excluding ARI, and the stock's run-up in April seems justified.