Please ensure Javascript is enabled for purposes of website accessibility
Log In Help Join The Motley Fool
Free Article Join Over 1 Million Premium Members And Get More In-Depth Stock Guidance and Research
By Steve Symington - Updated May 9, 2019 at 4:43PM

Shares of Tapestry (TPR -4.03%) -- formerly Coach before changing its name in late 2017 -- soared as much as 17.7% early Thursday, then settled to close up 8.6% after the luxury fashion company released strong fiscal third-quarter 2019 results.

More specifically, Tapestry's net sales climbed 1% year over year, or 2% at constant currency, to $1.33 billion. That translated to adjusted (non-GAAP) net income of $122 million, or $0.42 per share, down from $158 million ($0.54 per share) in the same year-ago period. Analysts on average were modeling lower adjusted earnings of $0.41 per share on slightly higher revenue of $1.34 billion. 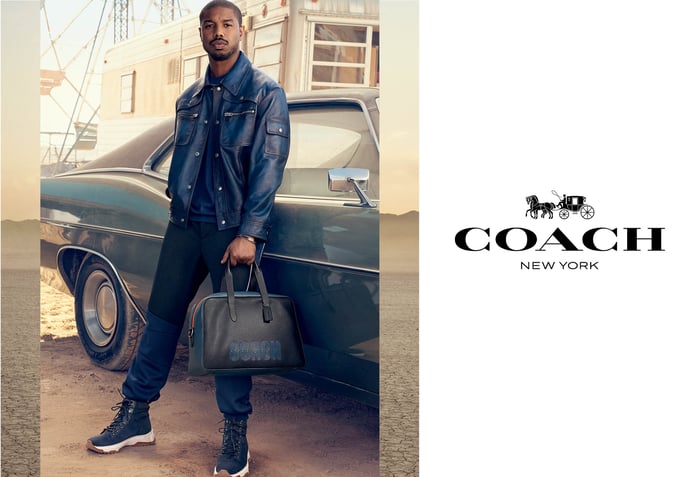 The actor Michael B. Jordan in a Coach ad. Image source: Tapestry.

CEO Victor Luis stated the company is pleased with its performance, particularly with higher sales and gross margins (on a constant-currency basis) from each of its three brands.

"Most notably, we again drove positive comps at Coach and generated a significant sequential comp improvement at Kate Spade with Nicola Glass' new collection resonating with consumers globally," Luis said. "Further, we continued to make key investments across our portfolio and to realize meaningful synergies from the successful integration of Kate Spade as we harness the power of our multi-brand model."

If that wasn't enough, Tapestry's board authorized a new $1 billion share repurchase plan. And for the full fiscal year of 2019, the company reiterated its previous guidance for revenue to climb at a low- to mid-single-digit rate from fiscal 2018, translating to GAAP earnings per share of $2.55 to $2.60.

Given Tapestry's progress in this reasonably strong quarter, and with shares still reeling on the heels of its disappointing report in February, the stock is rightly rebounding today.