Please ensure Javascript is enabled for purposes of website accessibility
Log In Help Join The Motley Fool
Free Article Join Over 1 Million Premium Members And Get More In-Depth Stock Guidance and Research
By Beth McKenna - Updated May 10, 2019 at 8:16AM

In the first quarter, AFFO per share -- a key REIT profitability metric -- soared 135% year over year.

Innovative Industrial Properties (IIPR 2.43%), which owns and leases properties to companies involved in the cannabis sector, reported strong first-quarter 2019 results after the market close on Wednesday.

Shares fell 1.3% on Thursday, which we can attribute to general market sentiment, rather than the company's earnings release. The broader market was down due to escalating trade tensions between China and the United States. The stock has returned a whopping 76.3% in 2019 through Thursday, versus the S&P 500's 15.3%.

Data source: Innovative Industrial Properties. *Adjusted funds from operations (AFFO) is a closely watched metric for REITs, as it's the main driver of dividend changes. **Percentages calculated using figures from financial statements, not the abbreviated ones listed in the table.

IIP's revenue growth was primarily driven by the acquisition of new properties, along with contractual rental increases at certain properties. Year-over-year revenue growth accelerated from last quarter's 111% and from full-year 2018's 128%. 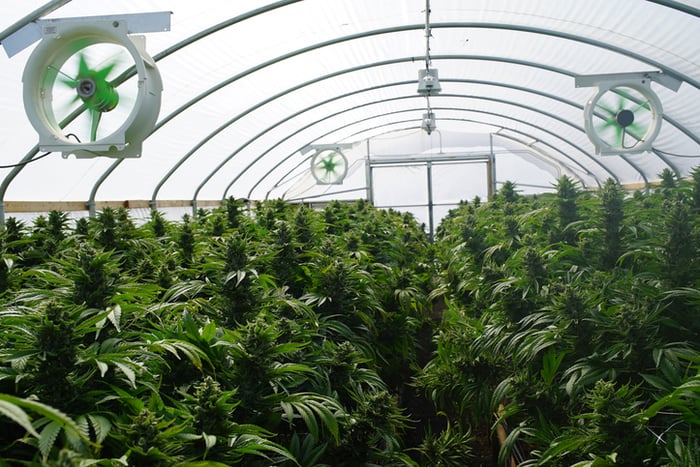 Here's the current snapshot of Innovative Industrial Properties' business, according to the earnings release:

Management didn't provide a quote in the earnings release, nor did the company hold a conference call, as it holds calls semiannually, not quarterly. This is not an unusual situation for a smaller company that's relatively new to the public markets. (IIP went public in December 2016.)

The company doesn't provide guidance. On last quarter's earnings call, Executive Chairman Alan Gold said the company's pipeline of pending and potential acquisitions is "extremely strong." Moreover, he noted that in addition to growing its presence in its existing states, it also wants to "penetrate new states, such as Florida."